↓
Home Menu ↓
Home→Blogging→In My Own Way

Sometimes I wonder if I’m getting in my own way. By that, I mean in finding Mr. Right and my future with him. Sure, I believe that things will work out when they are supposed to, but it’s been so long now. I’m in my early 30s and still single and alone. While I know that having someone isn’t everything in life, it sure would make things nice. I dream of being able to cuddle on the sofa with my love and watch a movie together. Yes, surely I dream a lot, but what else is a girl to do? Especially when sexy guys like Hugh Jackman and Ewan McGregor are already taken.

While the waiting game was okay in my 20s, by the time you hit the 30s, you begin to want to speed things along so to speak. I obviously don’t just want any guy, I want one that is going to treat me well and be there for me like I would be for him. When I was a high school girl, never would I have imagined that I’d still be single at my age. Having not dated in high school and foregoing the Homecoming and Prom dances, I figured that I was just meant to do my own thing for awhile. Awhile has turned into a long, long time. 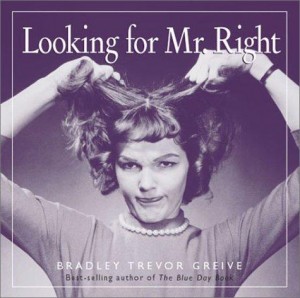 Mr. Right, are you out there?

I’m not the type of gal to swoon over this guy or that guy that walks by when I’m enjoying a coffee with a friend at the local Starbucks. I tend to be the type that wants to be doing the things that I love and somehow “bump” into him then. Surely guys like photography, writing, running and cycling. I definitely know that they love the latter of the two at the least as I see them all the time at races and running in the neighborhoods. Yet, I still find myself wandering around alone on days off and spending my evenings watching a movie solo.

So, back to my pondering of getting in my own way. It’s definitely a plausible possibility. Does not being a flirt and just doing your own thing cause a problem when it comes snagging the opposite sex? Maybe the line of thinking that he’ll just come along while I’m running my next half marathon and chat me up is all wrong. Heck, he’ll probably be afraid of messing up any possible PR I was hoping to make at the race. Or, fearful that he’s trying to start a conversation with me just as my favorite running song rolls around on my playlist.

The online dating scene however is just not my thing. I’ve tried the free sites and even that well known site that claims they are so good at the initial questionnaires that you will be in “harmony” with your love guaranteed. Yeah, not so much folks. Not even close to anything happened there. And, clubbing and bar hopping, not fitting for this chick who drinks maybe once or twice a year.

I suppose the waiting game it is. Though I must say, whoever created this game is on my thumbs down list. He or she will not be on my Christmas card list when the holiday season hits later this year.