I spent a lot of the today thinking about what the upcoming weekend will bring with the Walt Disney World Marathon weekend. I’m running the half on Saturday morning and it will be my fifth half thus far. I’m excited and in all honesty, a little nervous. Okay, maybe the nerves are excitement, I mean at least I’d like to believe that’s what they are. It’s not as if I haven’t run 13.1 miles before obviously, so I know it’s not that. My guess is that it’s the excitement of doing my first runDisney race and the fun that the weekend is going to bring (not to mention awesome bling!).

Oh, and of course I am excited about my costume. I mean hey, I’m going to be able to say things like “Avengers Assemble!” and throw around my plastic shield all morning long on Saturday. Can it get any more fun than that? Well, yes it can, because I’m going to be out there with a lot of friends and thousands of other runners having a blast. I know it’s going to be a weekend I won’t soon forget. 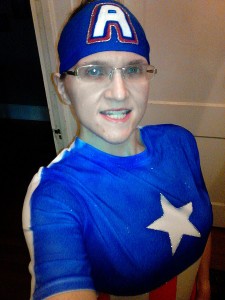 Quick shot of me earlier today when I put on my costume.