One week from today is Global Running Day. This is the date set for people around the world to celebrate the joys of running. To be a part of the event, you just need to pledge to take part in some form of running activity on June 1, 2016. You can do it alone by running in your neighborhood, or by joining one of the many scheduled runs all over that day. Over 150 countries and 1.5 million people are taking part in this big day!

Here in Orlando, Track Shack is again taking part in Global Running Day. Previously, the event was known as National Running Day, but it has evolved to become global. Hey, the bigger the better! I have run with Track Shack during National Running Day for the last three years. It’s always a great time with fellow runners. There’s nothing like celebrating the awesomeness of running with our own “holiday!” 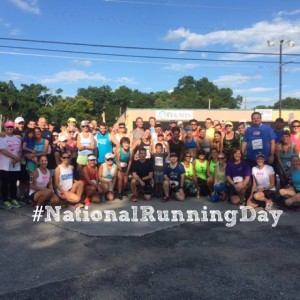 Speaking of National Running Day, it was created in 2009 and held on the first Wednesday in June. Organizers include the New York Road Runners, Boston Athletic Association, Running USA and USA Track & Field. Not only has National Running Day become Global Running Day in 2016, but it’s the first year of the Million Kid Run. Inspiring kids to embrace running as a way to get healthy and fit. As of this post, over 365,000 kids have pledged to run on June 1st, but the goal is to reach 1 million kids! 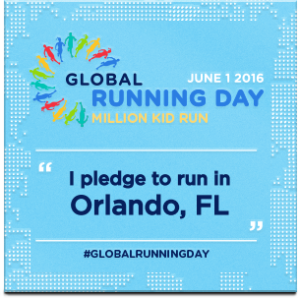 So, are you going to pledge to run on Global Running Day?