This post has been on my mind to write since last night. Here it is Saturday night, almost 24 hours later and I’m finally sitting down at my laptop. It all began with a funeral for a long-time family friend, and ended last night just before 8:30pm with another sudden, unexpected passing.

My mother’s 25-year-old Quaker parakeet, Peachy suddenly became sick on Thursday night. Peachy has been in the family since I was about 12 years old, so it’s hard to imagine many moments without him growing up. He was cute, but honestly, not the sweetest bird (though he most surely had his moments). He would continuously “bark,” what we called his incessant yelling that was more than annoying. All four of us (mom, dad, my brother and myself) all told him to be quiet more times than I could ever imagine counting. Peach became known as the family “attack bird,” always going after just about anyone but his person, which was my mom. He was her baby, always cuddling with her and it was during those times that he was at his sweetest. 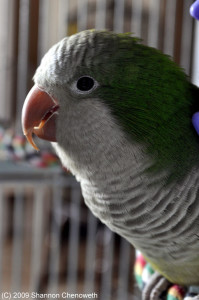 Peachy was also quite entertaining, he would call our cat Stinker who we had for a few years (“here kitty kitty”), and said a few other words and phrases. He was infamous for his “zipper” though. When my brother and I were in school, Peach learned the sound of our backpacks zipping up, and he did that noise while moving his head up all the time, even upon request. He was a bird around through so much of my life and my family’s life that when he went from appearing to have a respiratory/cold issue that he had gone through a few times before to not eating and almost completely lethargic on Friday, we knew he was not well. What we didn’t expect though was how quickly he would go downhill. Sadly, he passed away Friday night while laying on my mother’s chest. One minute he was with us, the next he had a seizure, then faded away toward that Rainbow Bridge.

The entire situation in and of itself is upsetting for the family, especially my mother of course. What I didn’t realize though, was how the events of the week and especially Friday would give me another example of how things happen for a reason. It actually goes back to last June, about 8 months ago, when I learned I wasn’t selected as a race ambassador for the 2016 26.2 with Donna. I previously write about how it upset me a good deal, not to be able to continue working with a cause I was so passionate about. At the time, I had so many questions, I just didn’t understand why I wasn’t to continue on that path. Then, in December, I had spoken with the pacing team coordinator for DONNA, hoping to head up to Jacksonville this weekend as one of the half marathon pacers. That too wasn’t meant to be. I questioned why it seemed I was being pushed back from making the trek up to Jacksonville race weekend. Financially, it couldn’t work for me, so 2016 would be the first year since running my first marathon at DONNA in 2013 that I wouldn’t be present at a race weekend I loved so incredibly much. 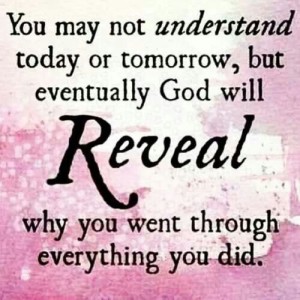 The events of yesterday made me see that why. Why it wasn’t meant to be. If I had been a part of the ambassador team, I would have been up in Jacksonville when our beloved family pet, Peachy had passed away. I wouldn’t have been sitting a couple of feet away on the couch with my mom as she held him during those last moments. While it was a hard thing to see happen, I can’t imagine how I would have felt if I was three hours away and not able to be there for my mom and family. The 26.2 with Donna race weekend is an important event and cause for finishing breast cancer, a cause I still hold dear to my heart. But, family…well, family has been and always will be a priority for me, after following my Lord and Savior, Jesus Christ.

While this reasoning on God’s part for having me not in Jacksonville, it’s still been bittersweet. Seeing friends posts on social media about the gatherings and then of course tomorrow’s big race are hard. I’m definitely happy for them, and am really hoping the weekend has gone well, and the marathon/half marathon today is great. It’s one of my favorite races of all-time, and I look forward to going back to paint the town pink in 2017.