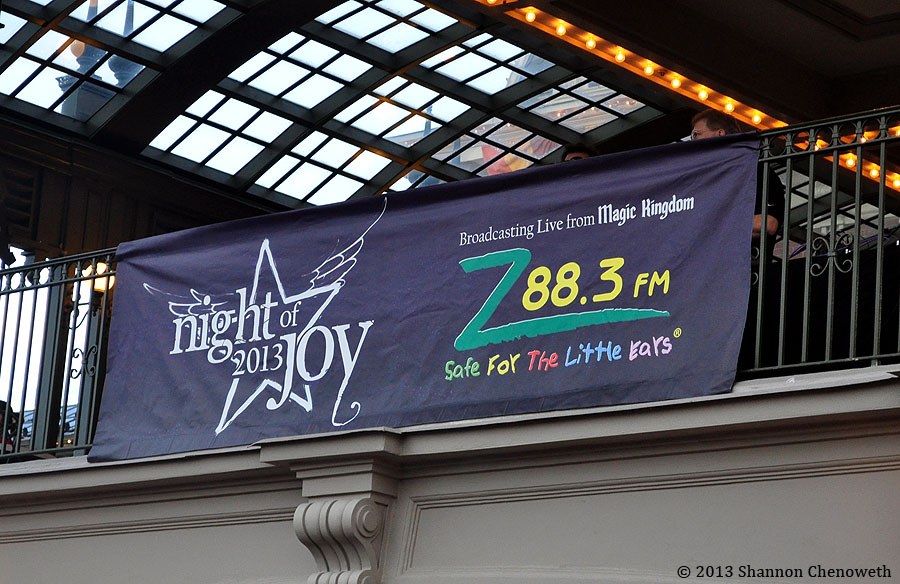 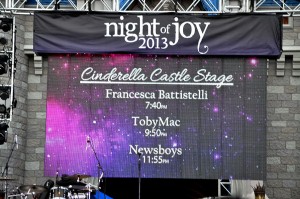 I was given the opportunity as a local blogger to attend the event on Saturday night which I couldn’t have been more excited about. I’ve been a big fan of TobyMac since his dc Talk days as well as fellow former band mate Michael Tait who is now the lead singer for Newsboys. I had never seen either perform live so I was very much looking forward to finally being able to do so. Unfortunately, I would be missing Audio Adrenaline on Friday night as well as Mandisa. The third member of the aforementioned dc Talk was Kevin Maxx who is now the lead singer for Audio Adrenaline. Of course, I would have loved to have seen others like Steven Curtis Chapman and Michael W. Smith, but again they were performing the evening before.

On Saturday late afternoon, I headed out to the Magic Kingdom with my mom. We arrived around 5:30pm and were quickly parked and headed via the tram to the Ticket & Transportation Center. It was drizzling a bit at this point, but thankfully, that was short-lived. By the time we made it via the monorail to the park entrance, it was drying out and the weather looked like it was going to be great for the evening’s concert fun. We picked up the tickets from Will Call and entered Main Street USA. 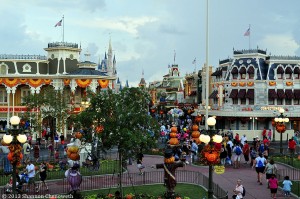 Right away, I could feel the excitement in the air. The park was decorated festively for the Fall season and just about everyone walking the street looked ready for a music-filled evening. I hadn’t been inside a Disney park since running the Walt Disney World Half Marathon back in January, so it was nice to see the Magic Kingdom again. Walking down Main Street, I recalled running down it nine months ago. Back then, it was filled to the brim with spectators lining Disney’s most popular street cheering on thousands of half marathoners. That night, it was more of a typical crowd of folks, only these people weren’t just there to ride Big Thunder Mountain Railroad. 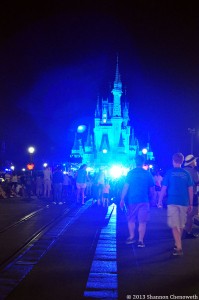 The concerts at Night of Joy were taking place among three different stages. The main stage was Cinderella Castle at the center of the park, the Galaxy Stage and Rockettower Plaza Stage located in Tomorrowland. After being advised that there wasn’t an area for media, I revamped my plans for trying to cover more than one stage due to the crowds. I opted to basically stay put at Cinderella Castle where Francesca Battistelli, TobyMac, and Newsboys would be performing. I would have liked to have seen some of the performers at the other two stages, but TobyMac and Newsboys were definitely tops on my must-see list. 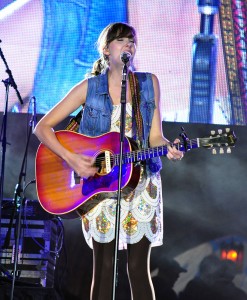 As I headed to wait for Francesca Battistelli to take the stage, my mom headed to the Galaxy to see Matthew West. I made my way through the crowds of people and eventually found a pretty decent spot as close as I was able to get to the stage. Everything was standing room only, so the night would consist of lots and lot of time on my feet. Not a horrible thing in the end considering that my weekday job is behind a desk. While waiting for the festivities to begin, I began to chat with other concert-goers. Everyone was in good spirits and had an artist(s) they were excited about seeing that night. 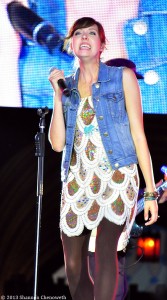 Once it was time for Francesca to hit the stage, the crowd cheered and clapped loudly. Battistelli has roots here in Orlando, having lived here as a teen. She was a member of an all-girl group called, Bella. As a fan of her music, it was great seeing her perform songs like “Strangely Dim” and “Free to Me” live and in person.

After a few songs, I left my spot and headed off to look around a bit as well as get a coffee at the nearby Starbucks. Francesca performed for quite a bit longer as I stuck around nearby and met up with my mom. I was still able to enjoy her show from afar as I enjoyed my coffee. If it wasn’t for the humidity, it would have been the perfect way to enjoy a cup of java. 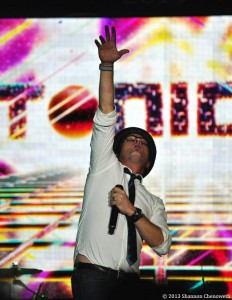 Once Battistelli finished up, I headed over to the Castle area to get a spot for TobyMac. It was still about an hour out from the scheduled start of his show, but you had to get there early as I learned. Again, I spent time talking to folks about this and that while we waited. I can’t say that the wait time flew by, but it was eventually time for the most anticipated performance (for me anyway) to begin. 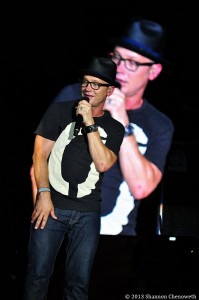 TobyMac came out with bounds of energy. I had heard that he jumps around and really runs around the stage, and that was definitely fact. He got the crowd really going with excitement. In between taking photos, I was pumping my fist and really getting into the music. There wasn’t a lot of room to jump around and such, but I did my best to not just stand there. 🙂

TobyMac was on stage for at least an hour, singing a number of favorites including, “Steal My Show,” “Eye on It,” and “CatchaFire.” His performance along with the Diverse City band was just awesome. I don’t think I had that much fun at a concert since I went to see Mandisa, Jamie Grace and Laura Story at Girls Night Live in 2012. Toby has an amazing gift from God to get the word out with music and you can’t deny that when you see him live. 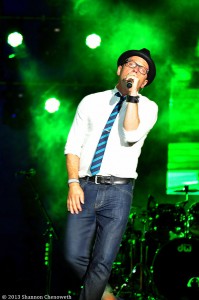 By the time Toby was done performing, there was still at least 40 minutes until Newsboys would be taking the stage. They were set to start their show at 11:55pm. I was feeling pretty tired from all the excitement and the long day (I had run that morning), but I was not going to miss Newsboys. Some people who were standing in front of me in the crowd left after TobyMac’s performance, so a number of us were able to move forward a bit closer to the stage area. It was at that point that a lot of us also took a seat on the ground. My sore and tired feet were grateful for a bit of time off of them as we waited for the Newsboys. 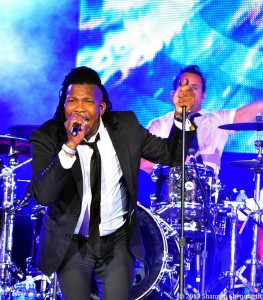 At about midnight, Newsboys took the stage. Despite my exhaustion, I was excited to see them. Michael Tait immediately got the crowd pumping as did Duncan, Jeff and Jody. Duncan Phillips is the band’s drummer and if you’ve never seen him perform, it’s quite a treat. He definitely gets into the music and rocks the drums. Jody Davis is lead guitar and Jeff Frankenstein is on keyboards. The four were exceptional and I loved every moment of it. I only stayed for four or five songs though, as my exhaustion was getting the better of me. I wish I could have stayed to watch them through til the end. 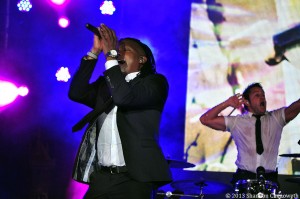 Night of Joy was phenomenal. I enjoyed myself a great deal and hope to be able to go in 2014. Thanks to Walt Disney World, World Vision and Z88.3 for an awesome concert event.