What were you thinking? Putting a terrorist on the cover of your August 2013 issue is jaw-dropping to me. You could have paid tribute to any one of the Boston Marathon bombing victims or heroes who aided that day yet you chose a man who caused the horrible disaster? I am beyond stunned at this decision on your part…a bad decision that I hope will haunt you with lacking sales of the issue and loss of subscriptions.

As a runner who felt the aftereffects of that tragedy, I am deeply saddened by this poor editorial choice. At this point, it doesn’t matter if the article between that cover is a great one, the cover just blew that all out the window for you. There are hundreds of other runners, Bostonians, and friends that will stand behind me when I call to boycott your magazine for this choice of “journalism.”

There’s already a twitter hastag campaign going on, #BoycottRollingStone if you too would like to have your voice heard. 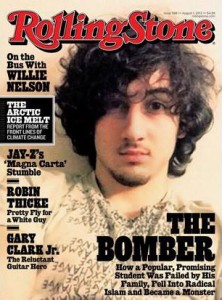