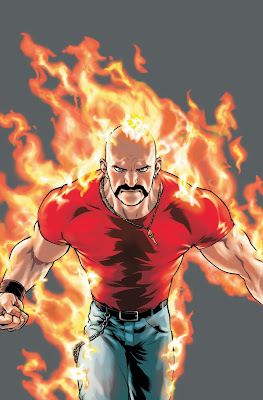 To begin with, I feel I should note that until this summer, I have previously been a dedicated Marvel fan and reader. Easily, 99% of my pull list at the comic shop was for Marvel titles. This isn’t to say that I had anything against DC Comics. On the contrary, I just never knew where or when I could “jump on” to a particular titles seeing as how DC’s books seemed to always have some kind of a Crisis going on which connected everything together. For someone not overly familiar with the DC Universe, I felt a bit overwhelmed by their offerings.

This all has seemingly changed in 2009. DC Comics has, in my opinion, really become accessible for any and everyone. Yes, there is a huge storyline going on with Batman, but entering into their world has been fairly easy. I feel as connected to Batman or the Lantern Corps as I do with Marvel characters like Spider-man or The Avengers. To this I must say, “bravo DC creative team, bravo.”

INFERNO is a one-shot book written by J. Michael Straczynski with artwork by Greg Scott. I spotted this title on the shelf at my shop and immediately passed by it. That was, until the scribe of the book caught my eye, Straczynski. It was his work on Babylon 5 that lead me to read comics at all (with the help of a friend). My first taste of comics and JMS was the first arc of his creator-owned series, RISING STARS. Wow, was that an amazing, mind-blowing tale. Truly, a work of greatest in my mind. Definitely go out and pick up the first arc collected if you have yet to, highly recommended. Anyway, since Straczynski had done me nothing but good in the past with his work in comics (AMAZING SPIDER-MAN, MIDNIGHT NATION, the list goes on), I figured this INFERNO book was worth a second glance.

In the book, we meet an odd man who is the only survivor of a cruise liner explosion that killed more than two-hundred people. The man has given a name to the hospital staff, but no one knows for sure if the name belongs to him or if he was trying to tell them something. This lone survivor appears to be suffering from a bout of amnesia. He doesn’t remember anything beyond that there was an explosion. Meanwhile, the one name he spoke, Frank Verrano becomes a dead end for the police detective looking into the case. She cannot find a single piece of information, not even a birth certificate.

The mystery man is suddenly attacked in the hospital and a huge, fire-filled action sequence breaks out. Fire-filled due to amnesia man being able to turn into his own version of the Human Torch. Anyway, his overseeing doctor plays a big role in the scenes to come as well. Another boat becomes victim to an odd bombing and an APB is put out on the fire man now calling himself, INFERNO. His story is one part of something called The Red Circle.

Now, I looked into this Red Circle a bit to see if I could find out anything since this is the first I’ve heard of them. According to Wikipedia, DC Comics recently bought the licensing for the catalog of characters from the former Red Circle Comics line. Red Circle Comics first came to light in 1973, publishing a title called Chilling Adventures in Sorcery. The comic book line ascends from the well-known Archie Comics Publications, as the company used it to publish stories that were non-Archie characters, specifically superhero stories.

The bottom line is, definitely check out this book. Not only is the writing superb, but Greg Scott’s artwork is beautiful and really compliments Straczynski’s words. This is the first work I’ve seen from Scott and thus far, I’m impressed and look forward to seeing more of what he can do.