First things first, we get an update on Craig! It was great seeing his smiling face and how great he’s looking! As soon as he gets back home, he goes to visit his father’s grave site. He spends some time there and decides that he is no longer afraid of 32 (his father past away when he was just 32 year of age). Craig is confident and ready for anything now. He is looking forward to the Finale.

Heading into the house, we see Ruben sitting inside alone. He states that he is fortunate to be back on the Ranch. The rest of the Red Team then enters, Tanya literally runs in as soon as she spots Ruben. “Ruben could not have come back at a better time,” she tells us as she hugs Ruben. The others follow her and give their returning team mate hugs as well. Everyone is all smiles and laughing at being back together. Ruben tells them that they all look great and skinny. They ask how he did at home and he said that the next day after going home he was in the gym, he continued doing what he had to do.

Outside, Jillian is walking with her team over to the sitting area near the pool. They are down to three, Jay, Tumi and Marie. The trainer apologizes to her team for what happened last week at the weigh-in. She explains that she did what she thought was right and always tries to make the best decisions for them. Furthermore, they did nothing wrong, she wants them to know that. The trio agrees that they trust Jillian and want to move on and win this week’s weigh-in. 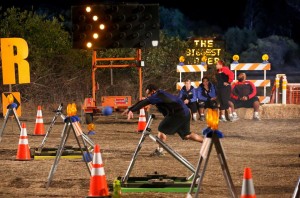 Challenge time! All three teams are outside with Alison Sweeney. She tells them that they are, “on the way to becoming the you that you want to be.” This challenge is a bouncing ball sort of deal. They have to bounce a ball 250 feet off of a trampoline to a second player who has to again bounce that ball into one of three large baskets worth one, two, or three points. Whoever gets to 30 points first wins. The winning team wins $1,000 for each member of their team. Hap states that “it’s about winning a challenge,” obviously that being just as important or more-so than the money. The red team is anxious to show the blue team that they can’t always win the challenges. The white team scores the first points, followed by the blue and red teams. In the end, the red team takes it and wins their first challenge!

It’s butt-kicking in the gym. First we see Dolvett with his red team. He is happy that his team not only won the challenge, but that Ruben is back in the house. He’s very optimistic about the weigh-in this week. David chimes in that “we want to have a streak.” Rachel is feeling very emotional and fortunate to have this close bond with her team mates. She has a history of spending a lot of time alone back at home and that has led her to some bad eating and health habits. It’s obvious she needed some great friends in her life and it’s nice to see that she’s found them.

Bob Harper and his blue team are working out in his Box outside. He is very impressed with Chelsea, believing that she wants this badly. “Chelsea is all in right now,” Bob says. Moving back inside, Jillian is working with her team, feeling the need to “center them” right now. They’ve taken a lot of hits week after week. Her trio is hard at work. Tumi is very aware of the toughness of the situation with them down two team members, “everyone has to perform up to task.” The feeling of wanting to win the upcoming weigh-in is there with these guys. Marie wants to be a mother, but has felt that she can’t with her weight issues. She states that she’s going to take things step by step and give it her all. Jay is running on the treadmill explaining that “the stakes are high” when he starts puking. Jillian looks over to see if he is okay as he keeps throwing up. After he’s done being sick, Jay tells us, “you gotta throw-up, you throw up then move on.” Talk about a tough mentality! You have to admire that! “No regrets!” Jillian yells out as we fade out of the gym. 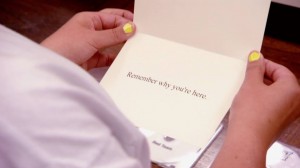 The contestants come back into the house after the workouts to find three cards and some DVDs on the table. They take the DVDs to the computers and begin to watch. They are videos of each of them six weeks ago, before they began their journey on The Biggest Loser. The emotions each one feels as they watch their former selves on the screen is heart wrenching. “It’s important we never forget, being healthy is the biggest gift we can give our family.” David states about this journey they are on. After watching, they all hug, changed by this moment that they have had with their former self.

Another surprise! A guest, former Biggest Loser winner Danni Allen visits the contestants! She brings them Subway and has lunch with them. She tells them to enjoy this experience, especially the Finale because it goes by so fast. The contestants are happy to see Danni and are very inspired by her and what she has accomplished.

Dolvett is taking Ruben to see his music producer. He wants to see Ruben doing what he truly loves. The producer is very supportive of Ruben’s health journey and has been working hard on his music with him. Ruben sings part of a new song that the producer believes really encompasses the experience that Ruben is on (maybe he will sing this at the live Finale?). Ruben then jokes with Dolvett and gets him to try to sing the song. Dolvett isn’t horrible, but they tell him to stay in the gym and to leave the singing to Ruben.

The weigh-in is now upon the contestants. Time to see how the teams did this week. Bob’s blue team is up first, with Hap stepping up to the scale first. He loses 8lbs which is a great loss for a week. Next is Holley who drops 5lbs. She isn’t so pleased with this number as she still has a lot to lose. Matt then loses 4lbs, followed by Chelsea who loses 5lbs. Last up is Bobby who also drops 5lbs. The total percentage of weight loss is 1.88% for the blue team this week. 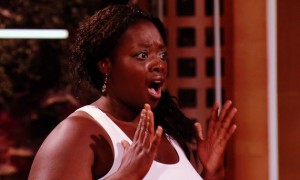 Jillian’s team is second on the scale. First for the white team is Jay who drops 5lbs. Marie then goes up and loses 6lbs. Tumi is last, but definitely not least. She steps on and loses and incredible 11lbs! Talk about an amazing weight loss! This puts the white team in the safe zone and they are all on the Ranch for another week!

Last up is the red team. “It’s blue and us,” Rachel states as Ruben heads up to the scale first for Dolvett’s team. Ruben came back onto the Ranch at 409. He loses 8lbs this week and seems good with that number. Rachel is next, losing 3lbs. She is not happy with her number. “I hope tonight my team can carry me, otherwise I’m going home,” she says as we can see the concern on her face. Tanya follows and loses 4lbs. She grunts, also not happy with her number on the scale. Jennifer is next and also loses 4lbs. “I just hope that it’s enough to save my team,” Jennifer states. It’s now up to David. Can he pull a big number to save the red team from elimination? David gets up on the scale and he does it! He drops and amazing 17lbs! Talk about a shocker! “I love you guys,” David tells his team mates as they learn that they are all safe for another week. 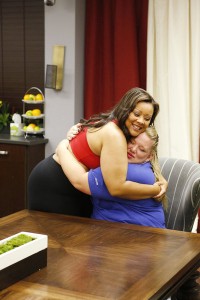 This means that for the first time, the blue team has lost the weigh-in. Someone will have to go home. The numbers show that Matt is the one with the smallest percentage of weight-loss on the team, so it will be him leaving…that is, unless Bob decides to use his save. Bob is the only one who has this left. Alison asks Bob what he would like to do. Bob looks unsure explaining, “Matt’s kind of a blind side for me.” He asks Matt his thoughts. Matt tells Bob, “I want to go the distance.” He then goes on to tell Bob that he will love him either way, no matter what he choices to do. Bob then tells them that he originally planned to hold on to the save for Chelsea. That he wanted to be able to save her in case she fell below the red line. But, that he doesn’t believe now that she needs protecting. With that, Bob announces that he would like to use the save on Matt so that he can stay. Talk about a tough moment!

So, what do you think of this week’s episode? Are you happy that Ruben is back? Thoughts on Bob saving Matt and his thoughts on who he wanted to use that save for?