Note: This post may (well, honestly it WILL) contain spoilers from last nightâ€™s episode of NBCâ€™s The Biggest Loser. So, if you have yet to watch the episode and donâ€™t want to be spoiled, please come back later. But, please DO come back.

This week’s episode opened with getting to see last week’s eliminated contestant, Fernanda Abarca as she is presently. She is down to 190lbs and is looking great. She may have only been on the Ranch for a couple of weeks, but she really took that short experience home with her. I can’t wait to see her at the Finale!

After getting the update on Fernanda, it’s time for a challenge! The contestants walk into the gym, only all of the equipment is gone. It looks nothing like it did on day one. Allison Sweeney is there and explains to them that they have just entered an auction. It’s an auction for workout equipment. Each team must bid on which equipment they would like to use this week. They don’t get to use any other gym equipment other than what they successfully bid on. The whole presentation of the “auction items” was akin to that of watching The Price is Right. Well, less for the product models anyway. 🙂 There was even a twist thrown in, which is only proper on The Biggest Loser! There was a mystery box which appeared to hold a bike. In actuality, it had baking bags of flour and sugar in it. Talk about the last thing a contestant wants! On the plus side, yet another surprise…there was also a trade voucher along with those baking goods. This allowed the winner of them, the white team to trade those bags for something else. They opted to go for the boxing equipment. Talk about a great deal on Team Jillian’s end! 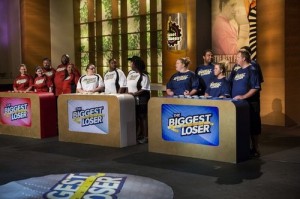 After the auction, the trainers return to the Ranch gym in bewilderment. What had happened to their awesome gym? Once the contestants explained the previous auction challenge, the trainers had mixed feelings on the equipment restrictions for the week. But, they all agreed that there would be great workouts happening nonetheless. This was a surprise to some of the contestants as the trainers worked them just as hard, if not harder then weeks one and two. This is where Tanya breaks down.”It’s very painful,” Tanya tells her trainer, Dolvett, obviously upset. Dolvett then pulls her aside in private and gets to her open up. She has a painful past of being rejected and mistreated by her family. It’s an emotional pain that only Tanya can deal with and let go of. Dolvett tells her that she should write a letter to her mom and her family, letting it all out and forgiving them. This will help her through this part of her journey. I really liked this moment between the two of them and Dolvett really knows how to talk to people.

For those who haven’t gone through a weight loss journey, there’s so much more to being overweight and unhealthy than what you see on the outside. Some people have deep pain that lead them to overeat or get to where they are. Everyone has SOMETHING they are dealing with, something that caused them to turn to food for comfort. Emotional eating is such a big hurdle in a weight-loss journey. The trainers while they may not be psychologists, I think they are so great at getting to the core of the problem, and as long as the contestant is ready, helping them get through the rough.

There is also a nice talk between Bob and Matt before the initial workout. Matt’s wedding was supposed to be taking place this week. He left his fiance back at home to come to the Ranch and get his second chance. He is finding it hard to be away from her, he feels that he is being selfish. Bob tells him that he believes he is in the right frame of mind and needs to be there get it done. Matt walks away looking a bit stronger. 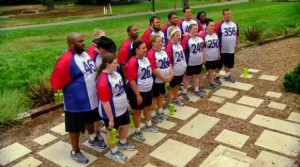 The contestants get a very special gift. They get to video chat with their families! This was a reward for winning a challenge in past seasons, so it was nice to see them being able to get the opportunity seemingly out of the blue. Bob narrates how they thought it would lift their spirits and re-motivate them to keep going. All the contestants of course are all smiles upon seeing their families on the screen. The smiles are soon replaced with tears though, as each one tells their loved ones how much they miss them. Matt’s fiance tells him that home will always be there, and that he needs to get what he came to the Ranch to do. She’s definitely a supportive person in his life and I think being able to talk to her will motivate him even more to continue onward toward his goal. We also get to see how close Ruben is to his mom. She wants him to succeed and being on The Biggest Loser is what he needs.

With that, it’s weigh-in time. Though, I do feel we learned a bit more about the contestants this week, the one-hour format is limiting in that way. The two-hour shows gave us more time to get to know them, but sometimes did feel a bit dragged out. Too bad they can’t do an hour and a half show!

First up was Team Bob, aka the blue team. Matt is first up to the scale and pulls a 6 pound weight loss. Bob doesn’t seem convinced that this number is what they should be seeing. He explains that Matt worked his tail off this week and the number does not reflect that hard work. Next up is Hap who loses 5 pounds, followed by Chelsea who drops 3 pounds. None are numbers that Bob was hoping for. Holley then steps up and loses 6 pounds, yet another number that seems a bit low for how much weight she still has to lose. Finally, Bobby rounds out the blue team and loses 7 pounds. All in all, these numbers make Bob a bit nervous as to his team’s standings for the elimination.

Next up is Jillian’s team. After having lost the first two weigh-ins this season, she can only hope that her team makes it out of this week without another person going home. Craig steps up to the Biggest Loser scale and has lost 4 pounds, followed by Marie who loses 6 pounds. Jillian is beginning to fear that red line at this point. Thankfully, next up is Tumi who has lost 10 pounds! Talk about kicking some serious butt this week! She has pushed the white team ahead of the blue team and that’s even before the final member, Jay weighs in. When he does get on the scale, Jay also shows a 10 pound weight loss. Team Jillian has rocked the week 3 weigh in! 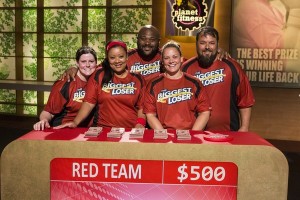 Finally Dolvett’s red team is on deck. It’s up to them to lose a higher percentage of weight than Bob’s team in order to avoid sending someone home. Jennifer is up first and loses 4 pounds. Dolvett breathes nervously as Rachel then steps up and drops 7 pounds. David is next and loses 6 pounds. Dolvett isn’t happy with this number, but states that David has been working hard, but the scale is just not showing that. Ruben steps up and loses 3 pounds. For a guy of his size, Dolvett was hoping for a higher number. The game is close between the blue and red team as Tanya approaches the scale. She loses zero pounds, nothing. Talk about a shocking number, or lack thereof. Tanya made some real strides this week and did the work in the gym, but again the scale just isn’t showing that.

The red team loses the weigh in and therefore is up for elimination. Sadly, this puts Tanya below the red line with her zero pound loss this week. Dolvett doesn’t take long to decide that he is definitely going to use his save on her. Tanya wants to be on the Ranch and he is going to make sure that she at least has another week. Talk about a close call! I know I’m happy the week ended on a positive note!