Week two on The Biggest Loser ranch is always such a rough week for the contestants and trainers alike. After pulling in big numbers week one, a lot of the contestants tend to not lose a lot of weight. Previous seasons have shown this to be fact and both trainers Bob Harper and Jillian Michaels eluded to this fact during the hour-long episode. 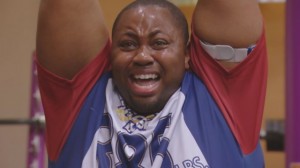 Craig during week 1 on the ranch

At the start of the episode, we see Jillian sitting down talking to Craig. “He needs this opportunity as much, if not more than anyone in the house,” Jillian states about why she used her save on Craig last week. We learn a lot about the hurt that Craig is going through with losing his father when he was just a young kid. He blames himself for his dad’s passing. Craig tells Jillian that he will use his dad and his own kids as his motivation for being on the ranch.

We then jump to Ruben and Dolvett going to speak with Dr. H about Ruben’s current health condition. Ruben has diabetes and has had quite a rocky past health-wise. Dr H tells him that he can turn things around and kick the diabetes as well as the weight.

We then get to see the contestants in the gym working out with their respective trainers. This is where Bob talks about week two; “Week 2 of The Biggest Loser is notorious for having bad numbers.” Everyone appears to be working out hard under the trainers direction. Dolvett notes that we have a new Ruben in the building. Jennifer and Dolvett have a moment and he tells her why he chose her for his team. “I see myself in you,” Dolvett explains to her and he tells her it all starts with loving yourself. 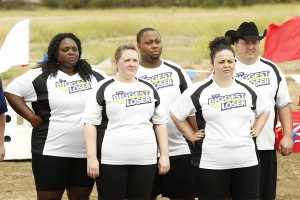 Team Jillian at the start of their first challenge.

Then, it’s time for the first challenge of season 15. The contestants walk outside to see a challenge set up that includes large dice, water buckets and a large aquarium type of container. Alison Sweeney explains to the group that this challenge is a big one. They have to roll the large dice at one end which will tell them how many buckets of water they can take to the other side to pour into their container. Whoever fills the container to the designated line first wins. A twist is that the teams are tied together and really have to work as a team to get it done. The prize? The winning team gets two dice at the weigh-in for their trainer to roll. This week the weigh-in has a big change tossed in. Only one person’s weight loss on each time will count for them all. Not only is this a tough situation to begin with, but these guys want that extra dice so that their trainer can have two names to choose from. 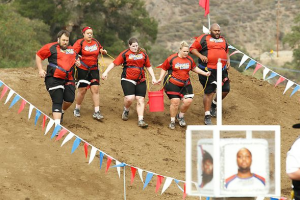 Team Dolvett at the challenge.

The challenge is extremely close, especially between the red and blue teams. At one point, Tanya yells at David to get over the hill they have to run/walk over during the challenge. Tanya explains that it’s easier to yell at him because her husband’s name is David. I love her sense of humor, she’s becoming a favorite of mine. That last run to the container is a nail-biter, but the blue, Team Bob wins it. Bob will now have two dice to roll at the weigh-in, compared to the one that Dolvett and Jillian will have.

We then learn that Hap’s wife was 8 1/2 months pregnant when he left for the Ranch and gave birth to their baby two days earlier. He was given the opportunity to “meet” his new baby and see his wife and two other kids via face-time. Hap really misses his family he tells us and will hopefully use them as more motivation to get healthy and do what he came to The Biggest Loser to do.

If you watched last season, the show had three kid ambassadors. They made a few appearances on the ranch, but mostly by video feeds or the like. Lindsay, who is now a freshman in high school comes back to update us on her status and how life has been for her since being on the show. She looks so awesome and is still extremely active. She has even motivated her older brother to lose weight and get healthy! It was definitely nice seeing Lindsay again, and knowing that she continues to do so well. 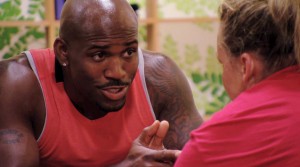 Dolvett and Jennifer have a one-on-one talk.

Since we have one-hour episodes this season, the Last Chance Workout seems to just sneak right up on us. All three trainers are working their contestants hard, as no one knows whose weight is going to count for the team. The contestants have mixed feelings on being the one chosen to represent the team. Both Jillian and Bob are not fans of the rolling of the dice approach. “I don’t have the greatest luck in the world,” Jillian explains about rolling and who might come up to weigh-in for the white team.

At the weigh-in, Dolvett rolls his dice and comes up with Tanya. Jillian rolls and gets Fernanda, and Bob rolls his di, coming up with Hap and Chelsea. Bob goes with Hap as his choice. This ends up being a great decision, as Hap has worked his tail off this week and pulls a 13. In fact, Bob’s entire team drops some impressive weight for the “dreaded week two.” Jillian’s team is up next and there are some great numbers for them as well, notable is Craig who drops 11 pounds which is great for his second week. Unfortunately, Fernanda loses the least amount of weight, 2 pounds. In my opinion, two pounds is two pounds, but it’s a reality show, so that doesn’t always do it for avoiding possible elimination. Finally, Dolvett’s team is up and after some similar nice weight-loss numbers, Tanya loses 4 pounds which pushes Team Dolvett into second place Team Jillian up for elimination yet again.

Since Jillian used her one save up last week, someone was definitely going home. We see that Fernanda had the lowest percentage of weight loss and falls below the red line. After two weeks on the ranch, she will be going home. It’s always a sad thing to see someone who is there to change their life having to go home, but I believe that Fernanda will do awesome at home and who knows, she may even win the At Home prize! 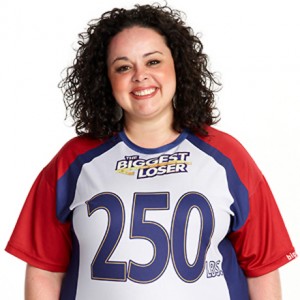 What did you think of this week’s episode? After learning more about some of the contestants, do you have any favorites yet? Are you for one team over another? Would love to hear your thoughts!