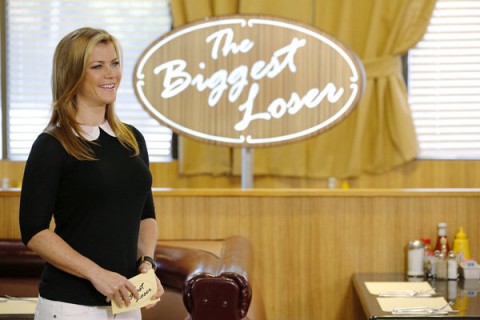 The episode opens with the contestants inside of a diner. Allison Sweeney is there and perfectly describes it, “very average, all-American diner.” Temptations and “junk food” galore. This is a challenge we quickly learn. The teams will have to correctly answer questions about obesity. The team that loses the challenge has to work in the diner that week in addition to their workouts on the Ranch.

Following along, some of the questions were pretty hard! I myself got two of them wrong, anything involving percentages or statistics can be tricky. Unfortunately, the white team loses this one. They just can’t seem to catch a break it seems. So, the blue and red teams head back to the Ranch while the white team heads to work at the diner. Marie, Tumi and Jay know this is going to be a tough week and that the only way they are going to get through it is with teamwork, working together. 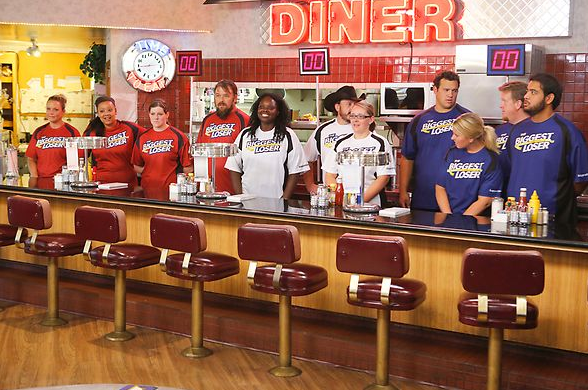 We get an update on Ruben. He is doing well, back in the studio recording his new album that is due out in February. He says he learned on the Ranch that he has to make time for Ruben Studdard. He wants to be in the 200s when he returns for the Finale and is looking forward to it.

Back at the Ranch, all three trainers are in the gym in front of the red and blue teams. They ask where the white team is. The contestants tell them about challenge at the diner and how the white team now has to work there this week. Jillian is shocked by this. “This is a joke, are you punking me?” she asks them, definitely not happy and appearing upset about this news. She feels as though she is cursed, her team just can’t seem to catch a break.

We see the white team at the diner dressed in their work uniforms working hard. The manager is making sure they keep moving serving food and cleaning. All three of the contestants are feeling the temptations that the diner has them surrounded in. Jay and Marie think the food looks good, Jay even wishes he could eat it. Tumi is concerned about the workout they will have to face with Jillian after they get done working. They all feel tired and know that they have a lot more work to do once they get back home to the Ranch that evening. Before they go back though, they decide to bring back some treats for the other teams. Maybe they can tempt them with some cookies or pastries?

At the Ranch, Dolvett is working his team pretty hard. He tells them that they could be at that diner like the white team, working. The red team is beginning to come to the realization that once they return home, that is what life is going to be like. They will be working their jobs and working out. It won’t be easy. Rachel is especially afraid of what life is going to be like. She tells Dolvett about her fears. He tells her to, “use your fear.” That how she deals is going to make her life. Tanya is also thinking about the “real world,” what it’s going to be like after the Ranch. She tells Dolvett that he has been so important to her, that he’s not only her trainer, but her friend. She has has a lot of respect for him. The rest of the team, agrees. This brings a tear to Dolvett’s eye which runs down his cheek. He reciprocates their thanks and the respect is there on both sides. A touching moment for the red team. 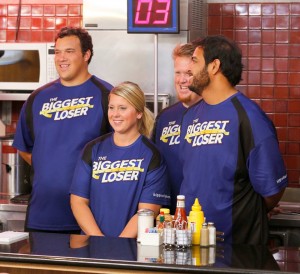 Outside, Bob is working out with the blue team. Hap is a focus. He is concerned about Hap’s low numbers on the scale. His two pound loss last week was not what either of them expected to see. The situation is driving Bob crazy. He tells Hap that he wants to make sure that Hap documents every single thing he puts in his mouth this week. They discuss the kinds of foods Bob wants him to eat or avoid. Bob wants Hap to listen to everything he says, Hap agrees that he will.

Bob pulls out a mat for his team to do rolls on during their workout. This is unnerving for Bobby. He says that he cannot do a roll, that he’s never been able to do it. He reluctantly tries to do it, but is unsuccessful doing a forward roll. Bob says this is an example of Bobby getting in Bobby’s way. Bobby needs to have more confidence. He needs to find “that inner strength…he has to be all in.”

It’s now 8pm and Jillian walks into the gym to find her white team on the treadmills. They are exhausted, it’s obvious to her. “We’re gonna have to work,” she tells them. Jillian explains that the intensity is going to have to be upped this week to make up for the time lost with them working all day. The three of them are exhausted and frustrated, and it’s only day one. Jay hopes that Tumi and Marie step it up this week because he put himself on the line last week for the team. Tumi is feeling out of her comfort zone with this challenge.

The blue team gets back in the house after their workout to find the treat temptations the white team brought back with them from the diner. There’s a note about sharing with the rest of the contestants. Some of the team is very into the treats, especially the cookies. Matt admits he is very tempted and wants some. Hap walks over and really wants a cookie, explaining how he is the cookie monster. Hap thinks he can have a cookie if he wants one. Bobby steps in and throws away the food temptations, to the upset of Matt and Hap. They then put soap on them to keep anyone from going in after them in the trash. Apparently though, that’s not the end of the temptations…the white team also left some presents on the pillows in the rooms. This brings a few laughs, and we learn how tempted this has made some of the team members.

Later, Dolvett and Jennifer are together in the house. He takes her over to the computer with the video cam where her family is on the screen. Dolvett wants to help Jennifer’s daughter, Taylor get healthy. He is going to have her keep a video diary and send it to him on a weekly basis. He also challenges her to eat more greens and get active, especially during commercials on TV. Taylor appears excited about this opportunity, and Jennifer hopes her daughter is successful and takes full advantage of this chance she’s been given. 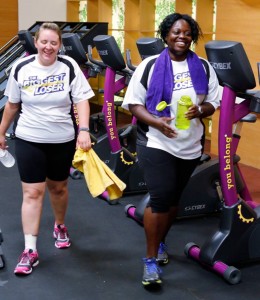 We then get to see a montage of the white team’s week. Between working at the diner and the workouts, they are totally exhausted and struggling with this challenge to fit everything in this week. The blue and red teams are getting in their final workouts before the weigh-in. “Show me how bad you want to work at this,” Dolvett challenges his team as they workout. Jay wants to put good numbers on the scale to show America that this can be done, working and exercising success. The white team is even doing jumping jacks in between serving customers, they are getting it done!

The weigh-in arrives. Allison talks about how it’s been a tough week for the white team, balancing a work schedule along with workouts in the gym. Time to see where the three teams stand.

The blue team is up first. Hap is called up to the scale. With his low number last week, he feels as though he has something to prove, that he is in fact a competitor. After listening to what Bob told him to do this week, he loses 11 pounds! Talk about an awesome number! Hap is definitely a competitor in the house. Chelsea is next, and pulls a four pound weight-loss which is good. Matt follows with a 9 pound loss, a great number for him. Last up for the blue team is Bobby. He gets on the scale and loses 3 pounds. This concerns Bob, he expresses such. The blue team loses a total of 27lbs for a percentage of 2.53%. 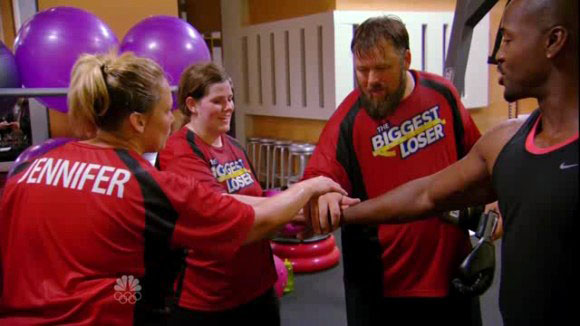 Red team is second up, with David first onto the scale. He loses just 5 pounds, which while a nice loss, is low for how much he still has left to lose. Dolvett states that there will be adjustments made next week. Tanya follows with a 4 pound loss, which is good, but she isn’t happy about. Jennifer heads up onto the scale and loses 7 pounds, which brings her to 200lbs! She is close to getting into the 100s! Rachel is last for the red team, and also loses 7 pounds, bringing her current weight to 171lbs! The red team’s total percentage of weight loss is 2.57%, making them safe for another week. Rachel is good friends with David and glad that she could help be a part of ensuring David is here for one more week. 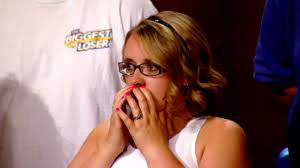 Now, it’s the white team’s turn. After working all week and doing late night workouts, were they able to drop enough weight to keep the three of them on the Ranch for another week? Jay gets up onto the scale first, the nerves run high through the white team as well as Jillian. Jay had a big number last week, so Jillian knows that he may not be able to lose a lot this week. Jay surprises everyone though, as he lost 6 pounds this week. Marie steps up and is beyond nervous with everything they went through. The scale blips and Marie has lost 6 pounds! Definitely a good number for her. Tumi walks up, and gets on the scale and drops 9 pounds! Amazing loss, especially considering all the stress of the week! Tumi has now lost 85lbs so far. This means that the white team’s percentage of weight loss this week is 3.24%, making them the winners of this week’s weigh-in!

Sadly, this puts the blue team as the team with the lowest percentage of weight loss. Putting up the numbers, Bobby has fallen below the red line. His journey on the Ranch is now over. He thanks everyone, especially Bob for everything that he’s been able to accomplish. “This journey pretty much represents a soul searching for me,” Bobby explains. He says how he was too ashamed and afraid nine weeks ago, but now he’s ready to talk to his dad. He is looking forward to the next chapter. “I have a lot of work to do.”

What did you think of this week’s episode? Were you surprised by the weigh-in?