Talk about a turning point episode! Last night the contestants went to singles. No more red, blue or white teams and no longer are they restricted to just one trainer. It was a shake up week for sure.

First though, we get an update on Bobby. He is doing very well and did exactly what he said he was going to do when he went home. He told his dad about his homosexuality and his dad was supportive, telling him that “he’ll always be my favorite boy.” His dad tells him that he is proud of him. Bobby admits to missing the Ranch, but feels that the experience helped him become more confident. 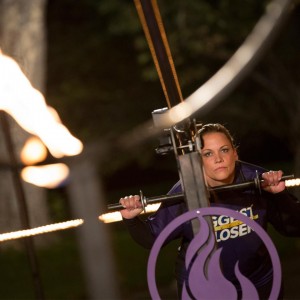 The hour opens with the contestants walking outside where Ali Sweeney is waiting for them with a challenge and the news that they are now going to singles. They get their new shirts before this big challenge. “Ten weeks in, this competition is heating up,” Ali tells them. Not only are they now on their own to stay above the red line, but the contestants left by the Finale will compete in the first-ever Biggest Loser triathlon. This was just as shocking to me as it was to some of the contestants. A tri is a big deal with three sports. Marie states that “everyone is going to fight for it.”

The challenge they have to compete in has them holding up 20% of their weight. The last man or woman standing wins a one-pound advantage on the scale this week. With them each on their own, that pound means a great deal right now. The amount of weight each one has to hold up varies from 34lbs up to 64lbs. The first one out is Tanya who holds up her 42lbs, followed by Tumi with her 47lbs. Third out is Jennifer holding 40lbs and lasting for 20 minutes. Hap is the first guy who then drops out after holding up 64lbs. Marie, Chelsea and Matt soon follow leaving it down to Jay, Rachel and David. David ends up lasting for 90 minutes with his 59lbs before he drops out. The game is down to the wire with Rachel and Jay. A couple of minutes later though, it’s all over as Jay tries to adjust his hold and loses his grip. With that, Rachel has won! Rachel is proud of her win, as it’s the first singles challenge. The excitement is interrupted however with a surprise reveal by Ali. She tells them that this 1lb advantage that Rachel has won is even more important this week because two people will be going home this week. Time to step it up to avoid that red line.

Back in the gym! Dolvett is especially excited about things going to singles now because he gets a chance to train some of the other contestants. Matt is excited to show Dolvett what he can do, that he is an athlete. He is a different person than he was on day one and feels that he made the right decision to come to the Ranch and delay his wedding. Dolvett agrees and tells him, “you’re a different person.” There is a great respect between the two now. 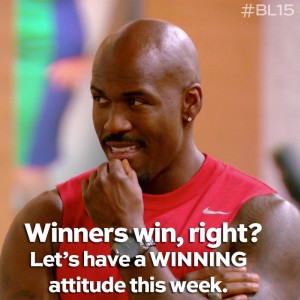 Outside in Bob’s little crossfit box, Bob is also feeling good about the change in the game. “We have some strong people in here today,” he tells them. He is looking forward to working with Rachel who he describes as a beast. He has Jay, Jennifer and Rachel out there doing box jumps. Rachel is having trouble, for some reason she is just not able to do it. Bob tells her that she is thinking too much about it.

Inside, Jillian is working with Tumi and David. “I’ve come a long way,” David states thinking back to his first weekend with Jillian in week one. Jillian agrees, she believes he needs to embrace his future. “It always the finish that defines you,” Jillian tells them. She then takes David outside for a talk. Nothing has turned out the way he planned he admits to Jillian. David is so intent on doing this weight loss, this journey for everyone else but himself. That is where he needs to change, Jillian tells him. It’s okay to for him to pick up his dreams and he has his whole life ahead of him. 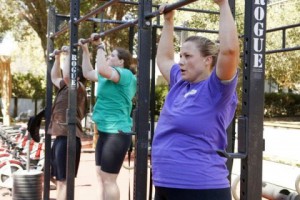 Jennifer is lying down in the recovery room upset when Bob comes in. He asks her what’s wrong. She is reluctant to tell him at first, but admits that she is upset and angry at herself for not being able to do the box jumps. She feels that she didn’t perform out there like she wanted to. She let negative thoughts stop her. Bob supports her and agrees that she needs to let those negative thoughts go. It’s about using that fear for good. She agrees that she needs to choose the good thoughts and move forward.

Out by the pool, David and Jay are with Rachel. They tell her that they want a re-match after that challenge. She says she is up for that, she’s ready. The guys offer up that the winner gets breakfast in bed, Rachel agrees. With that, the guys quickly pull off their shirts and jump in the pool, totally catching Rachel off guard. She soon follows, but the damage is done, the boys have beat her. Talk about an unfair challenge. Rachel laughs it off and says even though it wasn’t done fairly, she will stand behind the breakfast in bed deal. The next morning, she brings David and Jay Subway for breakfast in their room. Jay smiles, “victory never tasted so sweet.” 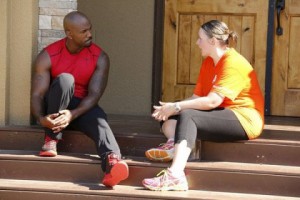 Last chance workout time! It’s full on in the gym with everyone working their tails off trying to get in as hard of a workout as they can before the weigh-in. Hap expresses concern as he hasn’t had the best numbers on the scale. Rachel states that everyone is focused on that triathlon. “Push yourself!” Dolvett yells out to the contestants. Jay not only wants to be above that red line, but he hopes to get to ‘onederland’ at this week’s weigh-in. He came so close last week and really wants to see his weight under 200. Jennifer doesn’t want to be one of the ones going home, as it’s the biggest week yet on the Ranch. “That’s what a last chance workout looks like,” remarks Bob Harper.

It’s weigh-in time, the first week as individuals. The contestants now stand in front of the scale with their trainers in multiple colored shirts. The fact that two of them will fall below that red line and have to leave the Ranch is obvious in the looks of concern on their faces. 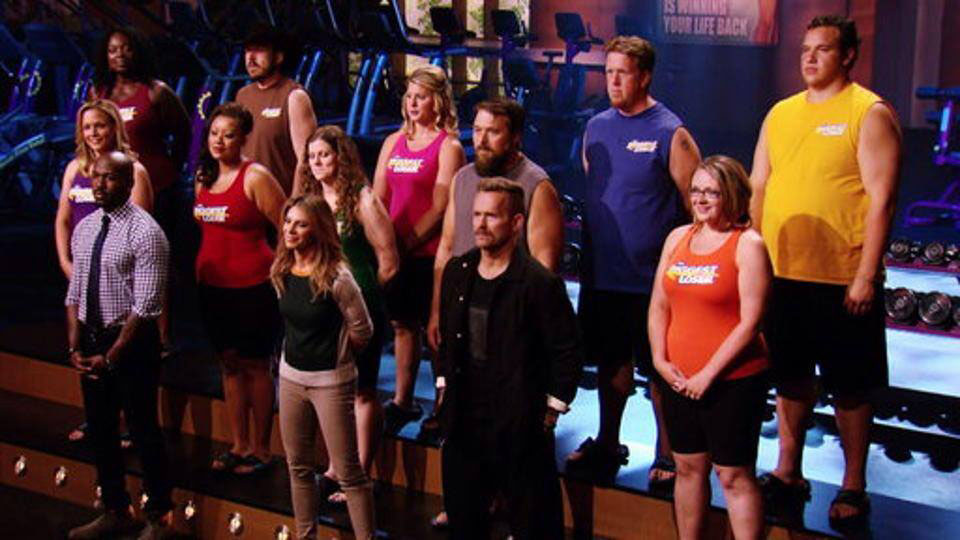 First up is Rachel who won the challenge and that one pound advantage. She is now in green as she steps on that scale. She loses 4 pounds, putting her current weight at 167lbs. Next up is Chelsea now wearing pink. She also drops 4 pounds making her current weight 177lbs. Jay follows on the scale now wearing brown. He loses 5lbs for a total weight loss on the Ranch so far of 101 pounds! This also means that he weights 196lbs, making his hope of getting under 200 pounds a reality.

Marie, now donning the color orange goes up and loses 5 pounds this week, her current weight now 197lbs, and she is also now in ‘onederland.’ She remarks how it was fun to be “pushed by the other trainers” this week. Next is Tumi in red who drops 9 pounds putting her current weight at 225lbs. She is overjoyed by her loss this week and is genuinely happy.

We now have David now in grey, who worked a lot with Jillian this week. He approaches the scale and Jillian hopes he pulls a good number because she really worked him hard this week. David loses 12 pounds for a current weight of 282lbs. He is happy and feels he had a good week. “One day at a time,” he says. Tanya is up next and still in red. She appears a bit concerned as the scale hasn’t always been a friend this season. Tanya doesn’t have to be worried though, because she loses 7 pounds, making her weight currently 201lbs. “Why not me, I can do it,” she says. 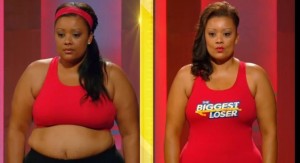 Hap follows, in the color orange. He drops 5lbs this week, current weight of 316lbs. The nerves are getting high as we are down to the last two contestants to weigh in. Jennifer, now in purple is now up on the scale. She needs to lose more than 4lbs to stay above the red line. And, she does just that, she loses 5 pounds which also now puts her in ‘onederland,’ her current weight is 195lbs. Jenn is feeling bittersweet about her victory because that puts Hap under the red line. The last to weigh in is Matt, who is still in blue. He steps up and loses 5 pounds, putting him currently at 263lbs. Unfortunately, this isn’t enough to save him from the red line.

Hap and Matt are both now below the red line. Just as they are thinking it’s time to say goodbye to everyone, Ali informs everyone that it’s time to say goodbye to the trainers. Once Bob, Jillian and Dolvett are gone, Ali drops a shocker on the group. Matt and Hap will have a chance to earn their spot back into the game. But, that’s not all, so will all of the formerly eliminated players. Enter the eliminated contestants as we get a ‘to be continued…’ So, just what’s going to happen? With the Christmas holiday upon us, we’ll have to wait three more weeks to find that out. Isn’t The Biggest Loser good at these cliff-hangers? 🙂

What did you think of this week’s episode? Are you glad to see that the contestants are now in singles? Thoughts on the eliminated players having a chance to come back?