Note: This post may (well, honestly it WILL) contain spoilers from last night’s episode of NBC’s The Biggest Loser. So, if you have yet to watch the episode and don’t want to be spoiled, please come back later after you’ve watched. 🙂 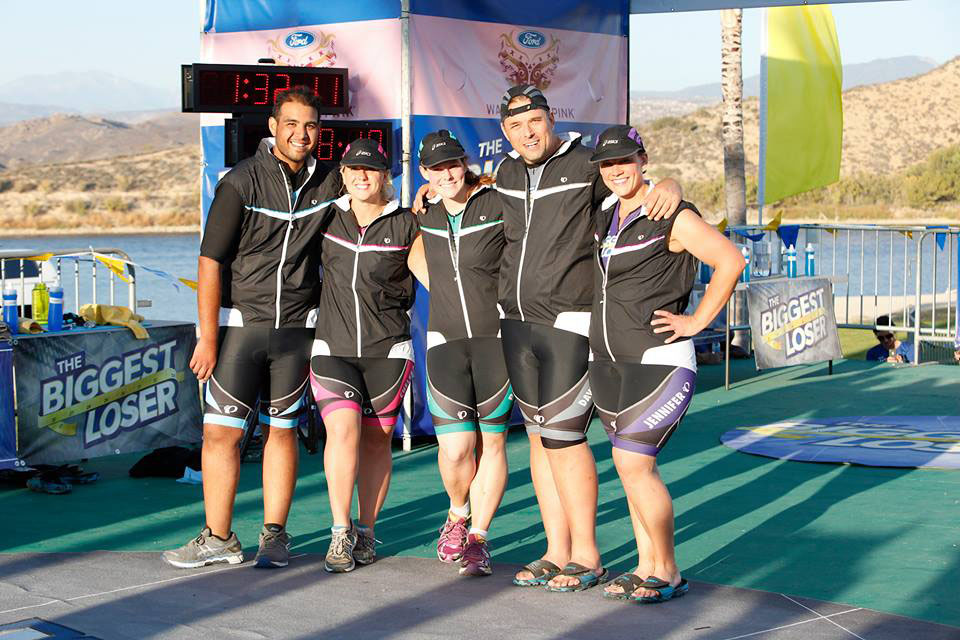 This was it, the big episode (well, besides the Finale next week of course). The final five would be competing in the first-ever Biggest Loser triathlon! The show has done Marathons in the past, but never a triathlon, so this was a big deal.

The episode opens with the contestants working out in the gym after the last weigh-in. They are all thinking about their journey from day one stepping onto the Ranch and how it’s all come down to this. Not only have they made it to the final five, but they have the opportunity to complete a triathlon. All the trainers are also in the gym working with them. “I want you to envision that triathlon,” Dolvett tells them.

The tables have really turned. They came onto The Biggest Loser inactive and now they are athletes. Jennifer is realizing that she is now excited to workout. “It’s such an emotionally draining experience…..I think week one Bobby would be so proud,” Bobby states about how far he’s come. Bob and Chelsea are having a moment. He is the one who gave her the nickname, little Firecracker. Bob tells her that he believes in her and knows she can do it. “I’m going to give it everything I’ve got,” Chelsea tells him. 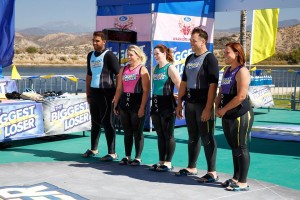 Bobby is nervous, he’s fearing the triathlon. He tells this to Jillian and she sits down to talk to him. Bobby explains to Jillian that his parents have put a lot of pressure on him, he feels as though there are a lot of expectations for him to stand up to. Jillian replies that his parents still love him no matter what. Bobby needs to stop being so afraid of failure and believe in himself. “Fear will pass, regret, that is forever,” explains Jillian. “Walk away with no regrets,” she states. Bobby is now feeling more sure of himself, less fearful.

We then get the Where Are They Now? with Tanya. She states that when she walked onto the Ranch, she was an unhappy mother and now she’s a confident woman. She goes into her local Planet Fitness and is proud to be there. “I feel I can take on anything,” she says. Tanya’s healthy comfort food business, Livin Soul will be a full-fledged restaurant opening soon! Her family and friends already love the healthier food she has made. 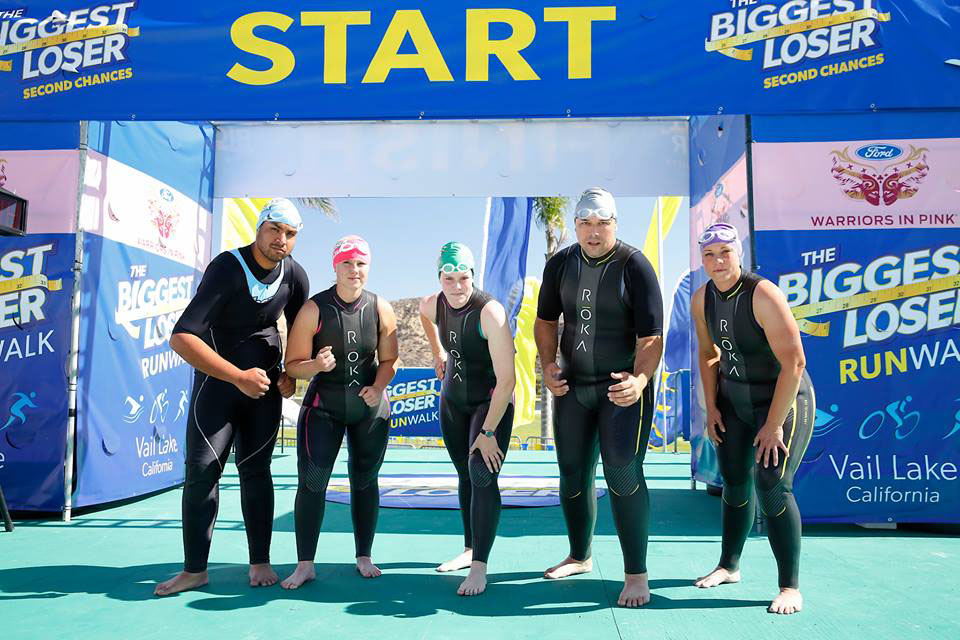 It’s game time, aka, The Biggest Loser Triathlon! The contestants are all lined up at the Starting Line and Alison Sweeney is also there. She informs them about the race ahead of them. It’s a sprint triathlon which consists on a 1/2 mile swim, 12 mile bike ride and then a 3 mile run. The winner of the race is automatically in the final three as well as the winner of a brand-new Ford Fusion hybrid car. Before the race begins, former contestants, Dan & Jackie Evans are introduced. They are ambassadors for The Biggest Loser RunWalk series which is the sponsor of this triathlon.

As the five are getting read for Alison’s mark to start, they are all thinking about their strategy. Rachel knows she can kick butt in the swim and plans on giving it all she’s got as soon as she hits the water. David says that Rachel is a fish in the water, so his strategy is to try to get ahead of her in the swim to slow her down a bit. Bobby on the other hand is scared of the swim portion of the race. Jennifer is just telling herself to keep swimming once she gets in. 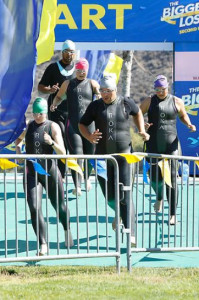 With that, they are off! Rachel immediately runs ahead and gets in the water. David doesn’t get ahead of her, but he’s right on her tail. Following David is Chelsea, then Jennifer and Bobby. “This is my moment,” David tells himself, you trained for this moment, you’re an athlete. Rachel is continually telling herself she is doing awesome, keeping the positivity coming. Bobby is not doing well. He’s beginning to struggle a lot in the swim. “Right now, I’m really struggling,” he remarks. He then thinks back to what Jillian told him in the gym, no regrets!

First in from the swim is Rachel. She is a bit ahead of David and is able to transition out of her suit and onto the bike before David gets to transition next. Following David is Chelsea, then Jennifer and Bobby out of the water. David is not necessarily happy that he’s not seeing Rachel, but he feels good about the bike. Chelsea is also feeling good, she’s right on David’s tail now on the bike portion. David keeps thinking to himself that he’s got to catch Rachel, but she’s just too far ahead of him now. Rachel is heading into the final transition and is telling herself over and over, “I own this.” 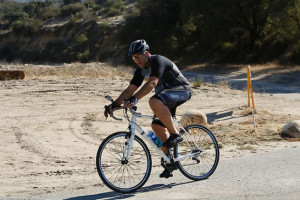 Rachel is now the first in from the bike and onto the 3 mile run. Meanwhile, David is still on the bike telling himself that it’s all about endurance at this point, and he’s right on the pace he wanted to be. He doesn’t know how far behind Rachel is is now, but he’s not giving up on pushing himself. “Never before the Biggest Loser… I could have never pictured myself doing a sprint triathlon,” Rachel says.

Talk about dominating this race, Rachel runs into the finish line in 1:32! Talk about an impressive performance! She rocked the triathlon. “I feel like I just grabbed a hold of my life again,” Rachel says to Alison Sweeney after she has finished. She goes on to say that this was the final moment for me, to take control of her life. She has not only won the first Biggest Loser triathlon, but she has won her life back. 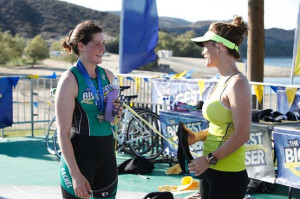 David finishes second with a time of 1:57 and couldn’t be happier. He remembers how fourteen weeks ago he was sitting around, a couch potato. “Here I am finishing this race, I couldn’t be prouder,” he says. He says he knows his family is watching and they too are proud of him and what he has accomplished.

In third place is Chelsea with a time of 2:11:30. She too is just happy to have finished and done this. “I’m reminding myself of how far I’ve come,” she states. “I’m going to keep working really hard.” Next in is Jennifer with a time of 2:17:38. Bobby does finish the race in 2:38. He overcame his fears and did it. 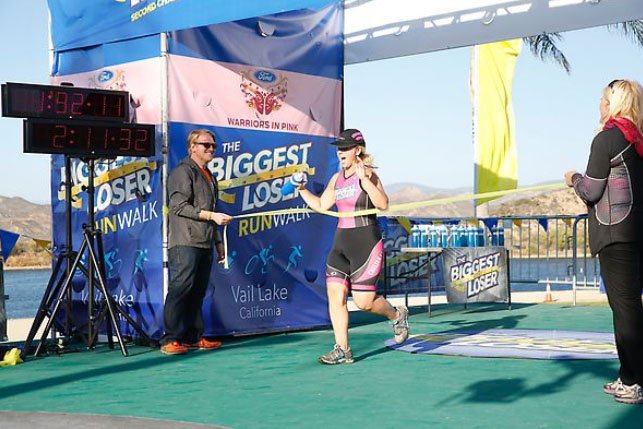 Back on the Ranch, it’s going to go from endorphins to tears. This is the time when the trainers sit down with the final contestants and “relive” the journey each of them have gone through since coming into the house. It’s time for each contestants story from when they arrived up until now to come out. Reminiscing. We see the hard times from day one and the rough patches all the way through the victories on the scale and some that just aren’t seen in the gym. It’s amazing to see how changed a person each one of them now is for the better. “Thank you for seeing something in me that I didn’t see in myself,” David tells Dolvett after seeing his video. They hug, as do the others and the trainers. “Now let’s go win this thing,” Dolvett replies.

Where Are They Now? Marie! We get to see how Marie has been doing since going home from the Ranch. She explains how exercise and health are now a part of her life. Her husband is also very supportive of her and what she is doing. Marie and her husband go to the doctor for a check-up. The doctor delivers good news to the couple. They can now start a family. “My life has completely changed…it was worth every second,” Marie states.

It’s weigh-in time. The final weigh-in on the Ranch before the live Finale. Rachel is the only one guaranteed a spot in the final three at this point. Only two of the remaining four will stand beside her during the Finale. “This is the accumulation of everything….the stakes are high,” David says as it all comes down to this. 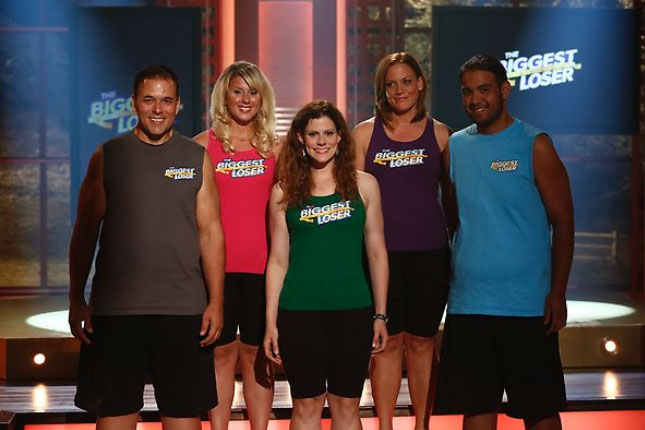 The last two to weigh-in are the guys. Bobby goes up to the scale and loses an amazing 17lbs this week. He looks over at his trainer tearing up a bit, “Bob, you’ve been an example to me…” Bob has been a key part of Bobby’s journey and it’s great to see that they both have a deep respect for one another. David then steps up to the scale. It’s either him or Chelsea who will join Rachel and Bobby in the final three. David loses an awesome 16lbs for a current weight of 243lbs. David has officially claimed his place in the final three. It will be Rachel, Bobby and David.

Sadly, this means that Jennifer and Chelsea fell below the red line and have been eliminated. They are still eligible for the at-home prize though. “This part of my journey is now complete. I feel like I’ve finished it strong to the end,” Jennifer states. Both women are amazingly strong and while they didn’t make it to the final three, they did extremely well. They did a triathlon!

So, who will be the season 15 Biggest Loser? Will it be Rachel, David or Bobby? Next Tuesday is the live finale, so be sure to tune in! It’s always an amazing evening celebrating the awesome accomplishments of everyone.