Note: I was given a complimentary entry into The Biggest Loser RunWalk half marathon in Panama City Beach on 12/29/13 in exchange for blogging about the event. No other compensation was received and all opinions are my own.

Looks like I’m going to cover The Biggest Loser RunWalk expo portion in two parts! I really want to cover just Jackie and Dan Evans on their own due to their history and involvement with the race series. 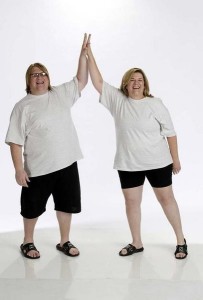 Jackie & Dan before their weight loss on The Biggest Loser.

If you missed season 5 of The Biggest Loser, then you missed out on not only a great season of The Biggest Loser, but the introduction of mother/son duo, Jackie and Dan. The Evans became the orange team and were always a stand-out “couple” in my mind. Of course, that was the theme of the fifth season, Couples. It featured ten teams of contestants all competing to lose the highest percentage of weight for that grand prize. Jackie lost a total of 90lbs while being on the show, and Dan lost 130lbs. Dan made it all the way to week 13, while his mom, Jackie was eliminated during week 6.

The Biggest Loser RunWalk series began in 2012 and has since hosted over 20 half marathon/5k events as well as an off-road challenge event. After completing 11 half marathons in 2011, Dan & Jackie were asked to become spokespersons for The Biggest Loser RunWalk, as the organizers thought they duo was perfect for the new event. Both mother and son can’t express their love for being a part of the RunWalk series enough. “I couldn’t have a better life, Dan either” Jackie states during the panel at the Panama City Beach expo. She goes on to explain that meeting people is what it’s all about and the races are just that. 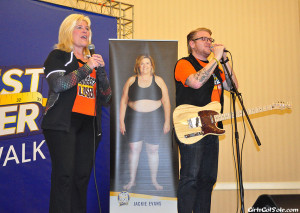 Jackie goes on to tell the crowd gathered in Panama City Beach that you have to put yourself first, your health must come first. No matter whether you’re a mother or always busy, you need to make the time for your fitness, and you have more to give when you do that. “My attitude is better. My energy is better. Take the time for yourself.” Jackie states about being an active person.

“By doing things such as running 5ks and marathons,” Dan goes on, you are an amazing person. “You finish and it’s a powerful thing that you can’t describe.” says Jackie. “People think you’re insane, but it’s so empowering.” Trust yourself that you can do it, and just get out there. 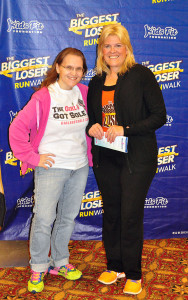 With Jackie right before she was to speak. She is so sweet.

“I will guarantee you two things in my race. Number one, I will cross the start and the finish in the same day. Number two, I will be faster than everyone that stayed at home in bed.” Jackie tells the crowd, getting smiles and chuckles from everyone. Dan then adds, once you earn that medal, that you have a right to wear it for the rest of the day. You earned it. “We’re so proud of you guys and glad that you’re here,” Jackie tells everyone with a smile. It’s obvious why the duo is representing The Biggest Loser RunWalk. Their energy and enthusiasm is like no other, and it’s contagious.

They went on to talk about their experience on The Biggest Loser. Most notably, how Dan got himself cast on the reality show. Jackie states that Dan was always self-conscious about his looks, and didn’t want to go out to perform his music because of it. At his audition, Dan explains that after waiting all day, he finally gets into the room with the casting directors. They were asking everyone why they wanted to be on The Biggest Loser. Most were giving good reasons, but nothing that was really mind-blowing for television. When it was Dan’s turn, he looked at the casting directors and stated, “My name is Dan Evans and I want to be on Biggest Loser because I want to be a rockstar. and my fat butt won’t fit into a pair of leather pants!” 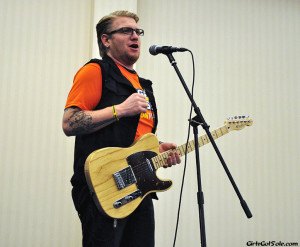 Yes, Dan did bring his guitar and sing us all a song. 🙂

Two days after the Finale on April 15, 2008, Dan was in Nashville recording his first album. The Biggest Loser taught him that “if I can conquer this, I can conquer anything.” He has since made his dreams of being a musician really happen. Dan’s album, ‘Goin’ All Out‘ was released soon after in the Fall of 2008. The album made it to #7 on the Billboard Country charts.

You can join Jackie and Dan Evans at a Biggest Loser RunWalk event near you!