If you haven’t been watching this season of The Biggest Loser, you’re just missing out. The Biggest Loser, now in its 14th season has been as inspiring as ever. The kid ambassadors only add to the greatness of the season, getting out there in their hometowns not only working on their own health, but inspiring their schoolmates. 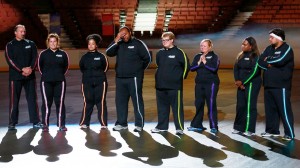 The Biggest Loser’s version of Tron. 🙂

So much about this group reminds me of why I came to love The Biggest Loser. These guys and gals are one big team despite the color shirt they are wearing in the gym. I love seeing how much they care for one another and aren’t letting game play take center stage for them. A great example of how inspiring these folks are when Francelina wins the temptation challenge and has the opportunity to also give a 2lb advantage to one other contestant. She could have picked any one of her fellow team members, but she chose Alex. She understood and respected that Alex put a lot on the line coming in second place during the temptation. Talk about inspirational.

Speaking of the kid ambassadors, this week we got to see Sunny, Biingo and Lindsay continue to grow in their health journeys and get out of their comfort zones. While Biingo found out his injury was healed up enough to resume baseball practice, Lindsay got the chance to perform with a local group of high school cheerleaders. I can’t imagine how intimidating that experience must have been for her. I recall those awkward teen years, a good deal of kids are anything but nice during that time. Not to mention how hard it is to feel as though you are worthy of an activity like being a cheerleader when you are struggling with your weight. She handled it well and I think the girls liked her. I hope she keeps up with it and works to follow her dreams. Sunny was able to try the Bollywood style of dance and not only did she have a good time, she got in an awesome workout.

With so many great contestants this season, choosing a favorite is not only difficult, but almost seems unfair. I hope each and every one of them succeeds not only in their weight loss, but in making their life better. It’s a full circle journey, not just about losing weight. That said, I do enjoy watching Danni, Francelina and Jackson a great deal as well as Gina. These people just seem to shine. This week, another contestant stood out to me as well, Jeff. His talk with Jillian Michaels was not only a needed one, but made us understand him a lot better. I could sense that there was something he needed to get into the open, and he just needed someone to push him to get it out. Jillian just has a way with people. Whether you like her method of training or not, you have to admit she does care. 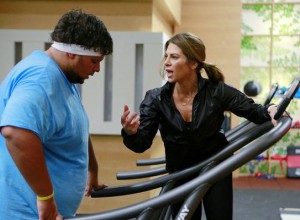 Jeff and Jillian have a one-on-one.

Have you been watching this season of The Biggest Loser? What do you think thus far?