After watching the season premiere of The Biggest Loser season 16 last Thursday, I was impressed for the most part with what I saw. I turned on the television with an open mind, knowing this season would be different. Of course, every season of Biggest Loser is unique, but this one may end up standing as the most different. 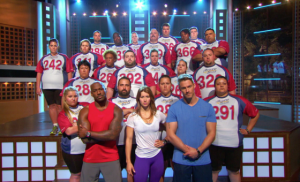 This season’s theme is, “Glory Days,” giving former athletes a chance to gain that former athlete within themselves again. There’s Olympians, former high school and college all-stars, and former professional ball players who have gone from that athlete who felt as though they could conquer anything to an individual who can barely make it up a steep sand hill. These are people who have achieved amazing things but for various reasons let that fall by the wayside and become unhealthy. Seeing them struggle during those first workouts goes to show that anyone, even a fit athlete can deteriorate through bad habits and life choices to be that overweight person who can no longer climb a flight of stairs without being out of breath. 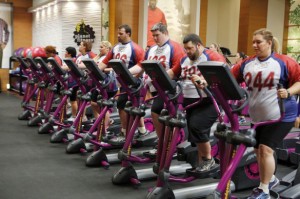 The new trainers who have come on-board are Jessie Pavelka and Jennifer Widerstrom. Both are young and look ready to get the job done. Seeing them as they first were introduced during the premiere, I couldn’t help but see the resemblance to Bob and Jillian. That was my first impression. The more we got to get to know them during the episode, the more I saw the differences and even more than that, how much they both seem to truly care about the physical, emotional and mental well being of the contestants.

Jennifer is a former star of NBCs American Gladiators which showed her fitness abilities. She has stated that her passion is people, she really wants to help individuals get healthy. Jessie has been involved in some sort of athletics since he was very young. He went on to play football in high school as well as college. Jessie later got into bodybuilding and has also appeared in numerous fitness magazines. He is into a holistic healthy lifestyle. 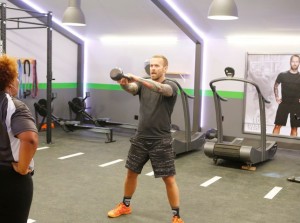 Dolvett is back in red and pushing his team toward victory in season 16. On the Ranch, it’s Dolvett, Jennifer and Jessie with the contestants. Bob Harper has taken on a bit of a different role this time around. He isn’t in the gym on the Ranch, instead he is the sole trainer at Comeback Canyon. Once a player gets eliminated, he or she then gets whisked away and surprised by Bob. He is their second chance to get themselves back onto the Ranch. Bob will be putting them through the paces and weighing each one in at the end of the week. Whoever maintains the highest percentage of weight lost, gets to stay. It continues on from there until Bob is left with one contestant. That person will return to the Ranch with Bob.

By the end of the two-hour premiere, I was encouraged about what season 16 might bring. I was impressed with the new trainers, especially Jennifer. She seems to be genuine, really caring about each and every contestant, wanting to help them not just physically, but deep down inside as well. That to me is what The Biggest Loser should be about, changing lives for the better. It’s about a total life-changing experience, not just weight loss. Sure, it’s a reality show that bases itself on losing weight, but dropping the weight is about so much more than an image in a mirror. I look forward to continuing to watch each week, watching these former athletes reclaim their lives again.

Did you watch the season 16 premiere? What did you think?