Kathrine Switzer broke down barriers for women athletes when in 1967 she became the first woman to officially run the Boston Marathon. In case you don’t know the story, Kathrine entered the Boston Marathon as K.V. Switzer back in 1967. Up until that point, the Boston Marathon was an all-male event, no women had run the event as an officially registered participant. It wasn’t until an official went after Switzer on the course, screaming at her and trying to rip off her race number. Thanks to Switzer’s boyfriend, she was able to keep running as he body blocked the official from continuing after her. The incident was broadcast world-wide and put a spotlight on women in endurance sports. It wasn’t until 1972 however that women were finally welcomed into the world of the Boston Marathon. If it wasn’t for Switzer’s work along with other women after that monumental day, women wouldn’t be seen as capable marathon runners.

Skirt Sports and Kathrine Switzer came together to create the 261 Fearless line of running clothes for real women. Since late 2004, when the Skirt Revolution was founded by Nicole DeBoom, great strides have been made for women’s endurance athletic apparel. So, it is no surprise that the amazing collection designed to empower women’s courage, strength and fearlessness has become a bestseller for Skirt Sports and only continues to expand on it’s offerings. That’s what happens when you combine such greatness!

Not only can you wear the 261 Fearless collection (from tanks to capris), but you can now participate in the first-ever Skirt Sports 261 Fearless Virtual Run! An event inspired by the fearlessness Kathrine Switzer had when she challenged the status quo in becoming the first woman to officially run the Boston Marathon. Lace up your running shoes, head out the door on Saturday, April 18th and challenge yourself to run #261fearless! You can run 2.61 miles or 26.2 miles, you choose the exact distance. Whatever challenges YOU. 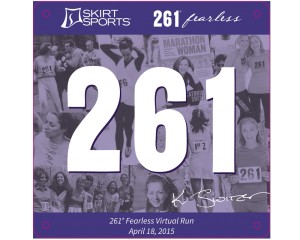