NOTE: This is an open letter to Ramada Worldwide/Wyndham Resorts. It’s not the typical type of blog post for me, but I am greatly upset by how my mom and I were treated on my last day in New York earlier this month.

On Monday, November 6th, I called your general reservations line inquiring about booking a room that evening near Macarthur Airport in New York. The man on the other end of the phone was very nice, informing me that the hotel offered an airport shuttle, and asked me if I would like to book a room. Unfortunately, the price he offered was not as good as the price I was able to find online through the discount website, Priceline. I thanked him, and proceeded to book the room through the discount site.

My mom and I then headed from our location in Queens, NYC to the subway station with all of our luggage in tow. The travel adventure to get to the LIRR station in Manhattan was less than a fun experience, as I was sore and tired from running the NYC Marathon the day before, and my 64-year-old mom wasn’t feeling well to boot. None-the-less, we made it to the train and couldn’t wait to get onto Long Island and settled into the hotel.

Upon arriving in Ronkonkoma, I called the hotel’s front desk, inquiring about the airport shuttle. Mom and I would have to take another shuttle from the LIRR to the airport for $5 a piece, and I wanted to see when we needed to let the hotel staff know we needed a pickup. This is where things started to go downhill. The front desk clerk told me that there was no airport shuttle offered, and she apologized that we were wrongly informed this. 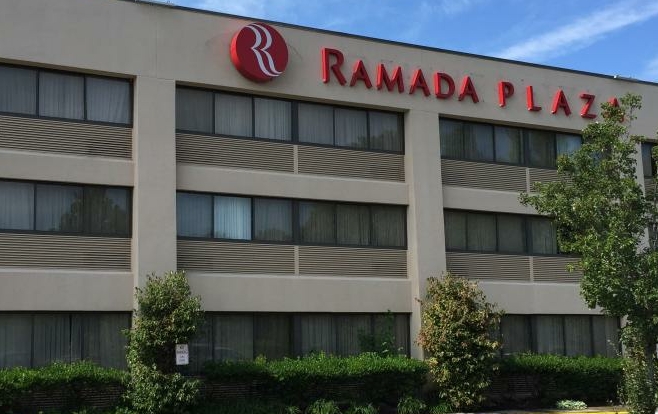 Being so exhausted and just ready to get to the hotel, we allowed the sweet clerk to call us a cab that would take us to the hotel. She informed me that I could get a receipt and speak to the hotel manager about the issue the next day when we checked out. This worked for mom and I, as we were sure this would be easily taken care of the next day.

The taxi cab that picked us up was very nice, he even mentioned that he had heard of this same issue before from other travelers. He stated that he has picked up others who were told about a shuttle, but in the end, there was none for this particular hotel. The driver dropped us off at the Ramada Holtsville, wishing us well, and letting us know that he could pick us up the next day when we needed to get to the airport.

Mom and I checked in, the desk girl being very nice, again telling us the manager would be in the next morning. We headed down to the room, which was on the first floor (I did appreciate that). Once inside, it was a basic hotel room, no frills. There were also quite a number of stains on the carpet and furniture. I went to look out the window, only to discover a view of a storage area full of tables and chairs. Not exactly what you’d expect to see outside of your hotel room window. During the night, as we tried to get some much needed sleep, the air conditioner/heater continued to go on and off with an awful high-pitch squeal. So much for a good night’s rest.

The next day, mom and I gathered our things, and headed toward the lobby to check out. I arrived to the desk first, and was greeted by another friendly female clerk. I told her about my issue with the shuttle and cab fare, and she went to the back to speak with the manager. She came back out twice, trying to show me apparently print-outs of their website listing before the actual manager decided to emerge and approach the counter. It was about that time that my mom came to the counter beside me. 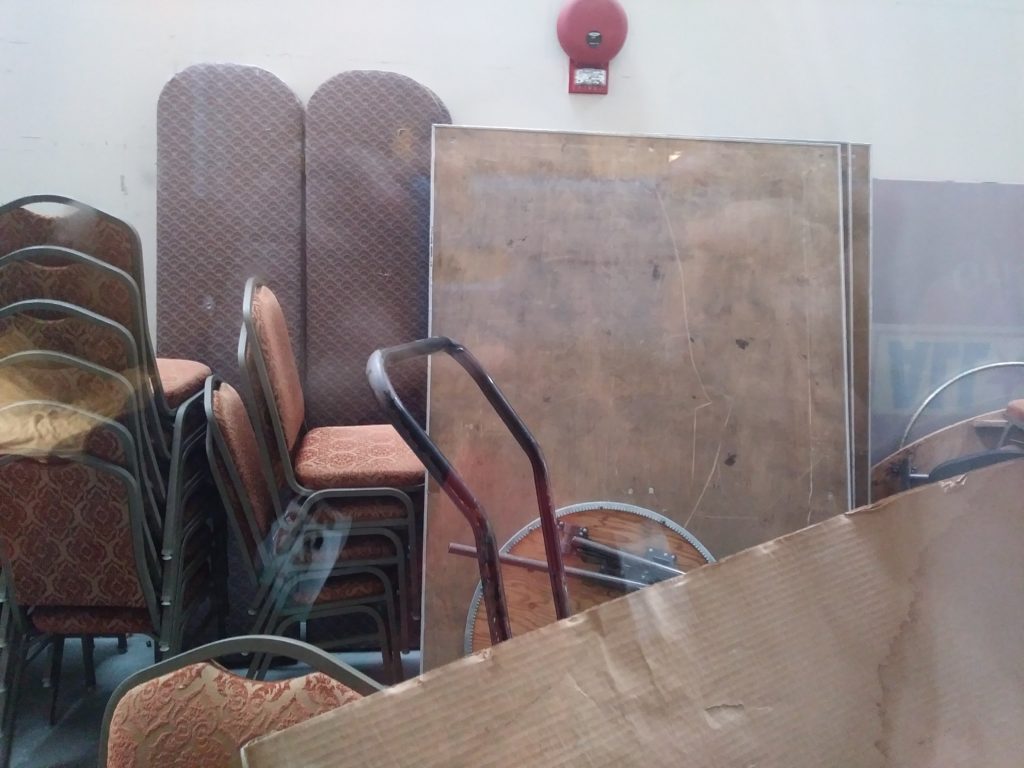 The view from our hotel room window.

The manager immediately seemed to have a not-so-friendly attitude as he told me he heard about the situation from the desk clerk regarding the shuttle. I replied, that yes, it was an issue because we were told something by the hotel corporation’s reservations line, and after booking, the location could not provide the shuttle. I told the manager, that all my mom and I wanted was for the hotel to pay for the cab fare for the night before and the cab we needed to now call to get us to the airport.

Right away, the manager seemed to become defensive, informing me that that this offering is not on their website, and that he could not accommodate the request for cab fare. I admit, I was not willing to accept this response. I told him that we expected Ramada to take care of us, and it wasn’t my problem that someone at reservations provided us wrong information. The manager replied that he was not going to pay for the cab. It was about this point that I mentioned that if he didn’t want to take care of his customers and make this situation better, that I would go online via social media and tell everyone that they should not give Ramada or Wyndham any of their business. I told him that I was a blogger and runner who had a good deal of connections and friends who travel a good deal.

The manager then told me that I was threatening and blackmailing him. I told him that it wasn’t blackmail, it was called if I don’t get properly taken care of as a customer, I will let others know about my upsetting experience. At this point, the manager decided he no longer wanted to speak to me, and tried to eject me from the counter area. He told me that he didn’t want to speak to me any longer, and that he would only talk to my mom.

I calmed enough to let my mom do the talking, but I told him I would not leave. He agreed to call the Ramada reservations line with us standing there to see what a rep informed him about an airport shuttle. When he did, he actually received correct information from this rep. He was told that there was not one offered by this hotel location. He passed the phone to my mom who spoke calmly to the rep on the other end and then asked to speak with a supervisor. After a brief period of time on hold, the rep returned telling mom that some phone reps are giving mis-information to guests. When my mom asked the rep to please inform the hotel manager of this, the manager told the phone rep he needed to find out who would pay for these cab fares, because he was not going to do so.

As we were all standing there waiting for the reservations folks to find out about this, the manager told mom and I that we didn’t really book with his hotel anyway. Booking through Priceline isn’t giving Ramada business. What? Are you kidding? Of course the hotel gets money from a discount site, it’s just through a third party. He continued to disagree with us, insisting that we had a Priceline issue, not an issue with Ramada.

At some point during this hold period, I asked the manager for his business card. He refused. Wow. Mom then asked him for his last name, he refused to provide that as well and actually put his hand over his name tag so that she could not read it. We only know his first name, Steven.

Steven then decided he no longer wanted to hear me, so he threatened to hang up the phone if I said another word to him. What was he, my parent? I said something (which I don’t recall), and he said, “that’s it, you blew it,” hanging up the phone and telling us both that he wanted us out of his hotel. I told him I would not do that, it was like 47 degrees outside! He insisted that we remove ourselves from his hotel property. I was pretty darn upset, and mom told me that we should just go.

Now, I don’t applaud myself for the curse words I threw in Steven’s direction as we were leaving (it was an F- you), as I feel bad in hindsight saying such a thing. I try to pride myself on being nice and a Christian does her best to not get down to such a level. Unfortunately, it was said. The shocker was that this manager, Steven yelled back at me, “I wouldn’t give you the pleasure!”

What? What kind of manager talks that way to a customer? Sure, I said something that wasn’t at all nice, but that stunned me. I have never been treated so rudely. I emerged into the cold weather in tears. What a horrible way to treat your guests. From the moment Steven approached us at that counter, I felt he had a chip on his shoulder. It was as if he had no intention of making us leave with a pleasant experience.

When I filed at compliant with Ramada Worldwide, I was told that someone would be in contact with me in about a week. Not hearing back from anyone, I called. The woman on the other end informed me that the case was closed, the company spoke with the property and doesn’t think they did any wrong. Ramada will not be doing anything for us.

I guess there is no such thing as customer service anymore. No one even called me or my mom to further discuss this issue, they just blindly believe that the manager was in the right in treating a guest in this manner. Until and unless Ramada/Wyndham decides to do something for us, I will no longer be giving you any business. Furthermore, I will be advising all of my friends, a lot of whom are runners and travel a good deal for marathons NOT to give your chain business. If you treat me this way, whose to say that you won’t treat them with the same disrespect?

My next step will be to lodge a complaint with the Better Business Bureau.