Four years ago, on November 27, 2011, I ran my first half marathon. That day has become known as my anniversary of becoming a half marathon runner. I started that race as a run/walker, and crossed that finish line as an even stronger version of myself. 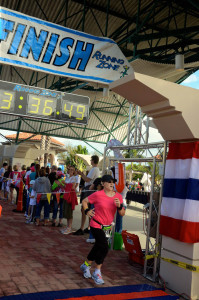 Crossing that finish line in 2011.

The 2011 Space Coast Half Marathon was the race, and I actually walked the entire 13.1 miles. Well okay, 99% of it, because upon entering that finishing shoot (which is quite long at Space Coast), I ran myself in and finished strong. That was a tough year for me. I had just gotten into loving running via the Couch to 5k program, but than hurt myself. I was sidelined from the new sport that I loved due to a herniated disk. One morning, I was running, then I found myself in pain. After dealing with lots of pain and discomfort, an MRI proved to provide bad news. I was told by my doctor that I needed to give up running. That it would no longer be something I could do.

After a good cry (or two) and getting angry about my situation, I learned to deal with it. That’s not to say that I was giving up on running (because honestly, I wasn’t), but I also knew that I wanted to continuing lacing up my shoes and hitting the road each morning. That meant I became a walker. Through encouragement from runner friends, I decided to walk a half marathon.

I still remember all the miles I put in walking around my neighborhood as I trained for the race. I walked the training miles just like I run/walk the miles now. You need to train your body to do 13.1 miles irregardless of how you are doing it. Looking back, I walked miles between 15:00 to 16:00 per mile which is great for just walking. Heck, I’ve run/walked that kind of pace for long marathon runs in Galloway training. 🙂 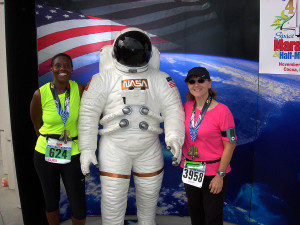 After the race with friend, Yolanda.

Race morning back on that November day began with meeting a runner friend (who I’m blessed to still call my friend to this day) and carpooling over to Cocoa for the race. The half marathon was my first real race outside of Track Shack events and I still recall to this day how nervous I was. It was so great to have a more experienced runner like my friend, Yolanda with me that day.

I crossed the finish line of the 2011 Space Coast Half Marathon in 3:36:51. That is a 15:57 per mile pace and since I was walking it, I feel good about that time. Also, I had pushed through so much with my back injury to become a half marathoner. That day became what is still considered one of my favorite race day memories. I proved to myself that I could do it, and it was such an amazing feeling.

As I am upon my now 16th half marathon this weekend at the Space Coast Half Marathon, I feel blessed. Blessed to see how far I’ve come as a runner and a person over the last four years. I fully believe that running has helped show me how strong and determined I really am. I’m thankful that I have been able to do this sport that I love. I’m also thankful to the Jeff Galloway program for allowing me to again resume running not long after that, in December after speaking to a specialist about my back. I went on to officially run/walk my 2nd half marathon at the Orange Blossom Half Marathon on March 4, 2012.

I have had so many amazing experiences at races and training runs because of running and my Galloway group, and I don’t take it for granted. God has blessed me with being able to do this thing that I love. Sure, sometimes I wonder what I’m thinking during a race, but in the end I love being a runner so so much. I pray I can continue to do it for years to come. 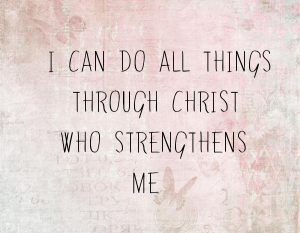