**This blog post covers days one and two in NYC, which was Friday and Saturday before the 2017 TCS NYC Marathon.**

Last weekend, I was in New York running the 2017 TCS NYC Marathon for 261 Fearless. I arrived in New York late Thursday, but didn’t meet up with the team until Friday around lunchtime. From that point onward, it was the start of my incredible extended weekend with 261 Fearless.

I was staying at an Aunts home Thursday and Friday, so on Friday morning, she drove me to the Long Island Rail Road station. The ride was about an hour and 20 minutes long to Penn Station. When I arrive at Penn, I headed out to the street to walk to the Adidas store where we were having our Team 261 Fearless meeting. The walk to the store would take me over 20 minutes, so I figured I would stop along the way for a snack of some sort. I found a Vitamin Shoppe a few blocks before I reached my destination, so I grabbed a protein drink and some bars for future snacking. 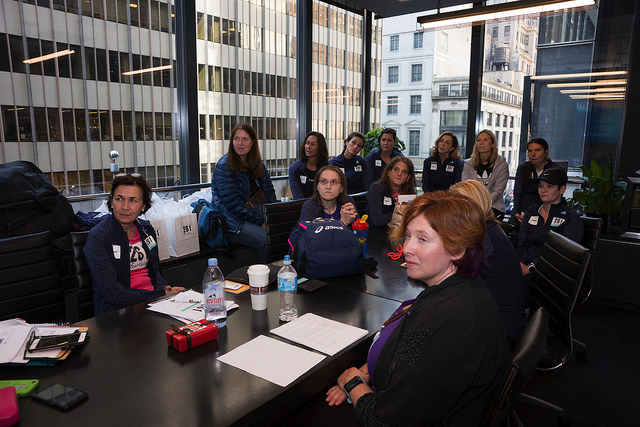 When I arrived at the Adidas flagship store in NYC, I was immediately greeted by Deb, our team contact. We hugged and she told me that the team was meeting up on the third floor. Heading inside, immediately I noticed how huge the flagship store is. It is definitely impressive. In hindsight, I wish I had pictures of how neat the place is. I made my way up to the third floor, and not knowing where I was, an employee helped me find the meeting room.

Meeting my team, and Kathrine Switzer was SO great! I got the biggest hug from Kathrine and it made my day. She is the sweetest person. I am blessed to now know her. The meeting was filled with info on our weekend plans, including race morning of course, as well as some neat photo and video opportunities for Adidas and media. After that, we headed downstairs for a 261 meetup.

The meetup was a chance for any 261 Fearless ladies in the area and/or who were running the NYC Marathon to meet Kathrine and the 2017 Team 261 Fearless NYC. Kathrine spoke, and then we heard some stories from a few Fearless ladies. It was then time for Kathrine to go, as there was going to be a Fearless AF panel with Adidas. 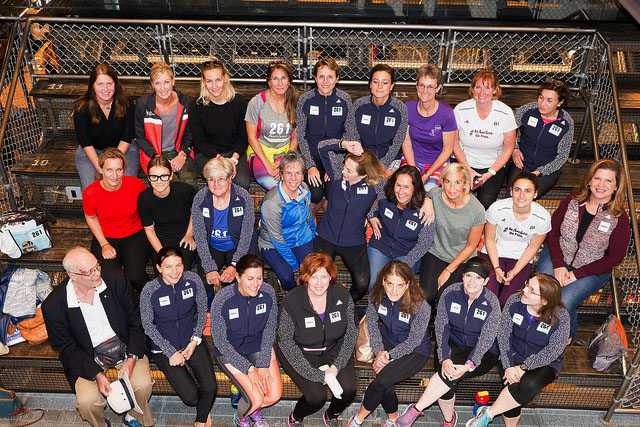 Team 261 Fearless got seated, and we were able to hear all about Adidas awesome new Fearless AF campaign that involves Kathrine Switzer, Robin Arzon, Jesse Zapo, Mary Keitany, and Jen Rhines. If you have yet to see this super awesome video, head over here to check it out. We got to see it at the panel, and it’s sooo good!

Unfortunately, the shakeout run with Kathrine had to be rescheduled until after this panel, so I had to miss it due to having to catch a train back to Long Island. Disappointing to be sure, as I was looking forward to that run with the team and all the 261 Fearless women who came out. But, since my Aunt had generously agreed to pick me up at the train station in Riverhead, I would have to miss out on the run.

The next morning became a bit of disappointment for me. The team had a trip to the Top of the Rock scheduled at 9:30am. I had gotten Lyft scheduled to pick me up in time to get to the LIRR in order to arrive in time to get to Rockefeller Center, but the driver cancelled on me that morning at the last minute. Upsetting to be sure, I was very much looking forward to that Top of the Rock experience. As it turned out, I got into the city about 9:30am via the Hampton Jittney, but there was no way I could get to Rockefeller Center in time (not to mention that I had all of my luggage in tow). Sometimes, life just doesn’t go as you’d like it to. 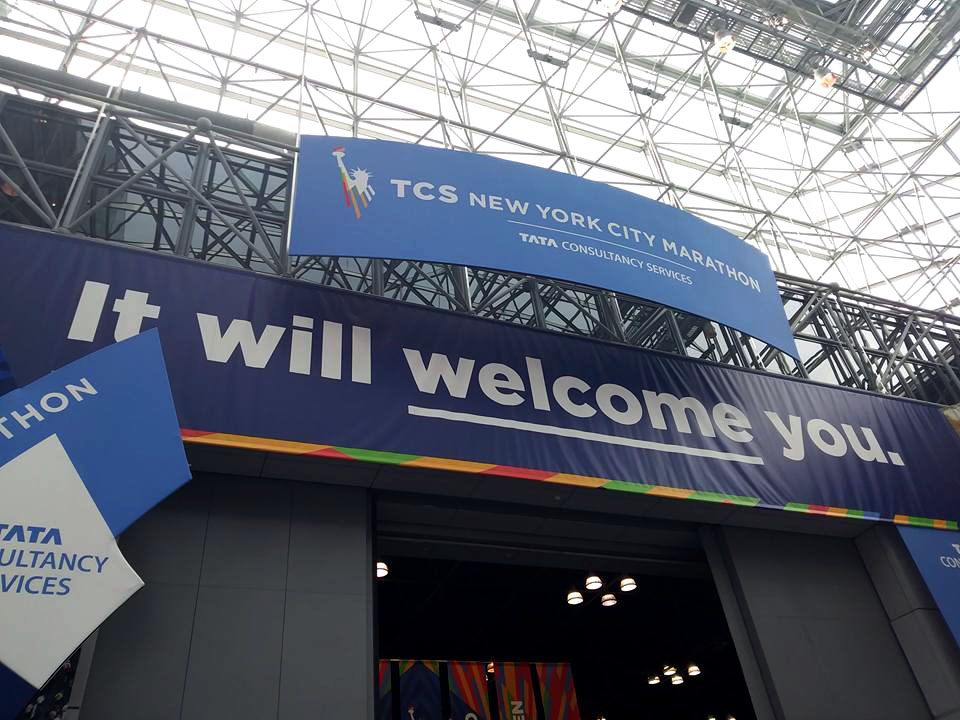 So, once I got off of the Hampton Jittney (it’s a bus that you can ride from Long Island to Manhattan), I got off and took the subway to Queensboro Plaza, which was the closest subway to the hotel my mom and I would be staying in on Saturday and Sunday nights. That was three stops, and I got off, and dragged my noisy suitcase (the thing was squeaking like crazy, needing to be oiled) along with my other stuff down the sidewalk as I walked the 15 minutes to the hotel. I was unable to check in until after 1pm, but was able to leave the squeaky suitcase and my duffel bag with the hotel clerk to hold and I went back off to the race expo.

The expo for the TCS NYC Marathon is huge. I remember how much that fact stood out to me when I first ran the marathon in 2015. So, upon arriving at the Javits Center, I was not as surprised this time around. With the change in major sponsor though, from Asics to New Balance, it was different than I recalled it being before. But, maybe it wasn’t so much, as it was two years ago that I had been there. 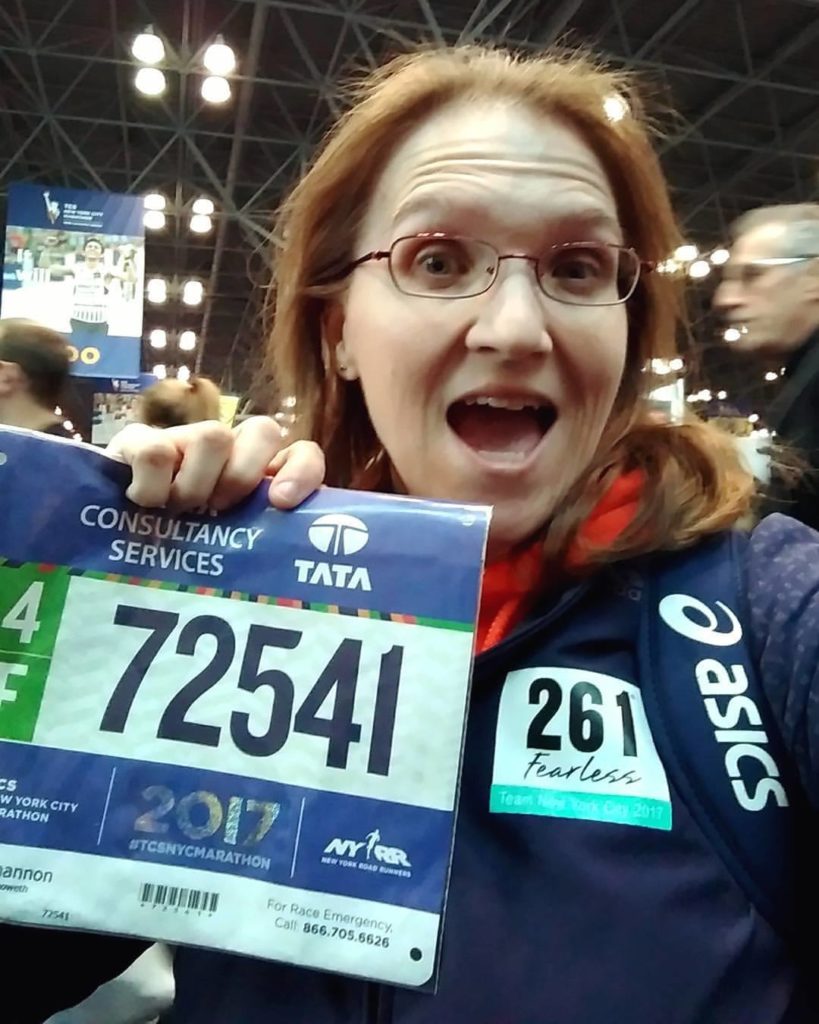 Immediately, I got in line to pick up my race bib. It was a fairly quick process, but the expo floor was quite busy. After I picked up my bib, I got in another line to get my race shirt and bag for the pre-start village. That too was an easy process, and before I knew it, I found myself in the midst of New Balance gear land. I had told myself that I wasn’t going to buy anything in there (which I did well at), so I maneuvered through there to the main vendor area of the expo.

I didn’t check out many of the vendors, but I did hit up Generation UCAN, JackRabbit NYC (for the 2017 NYC Marathon OOFOS), and found the Runner’s World booth. The last one was where I got to meet the wonderfully inspirational Mirna Valerio! I also finally met fellow Skirt Sports Ambassador Mary Sutter who was over there meeting Mirna as well. Meeting Mirna, getting a hug from her and a few minutes to chat was a highlight of my weekend. I love, love her book, and I can’t recommend it more. If you missed my blog post about it, please do check it out and be inspired. 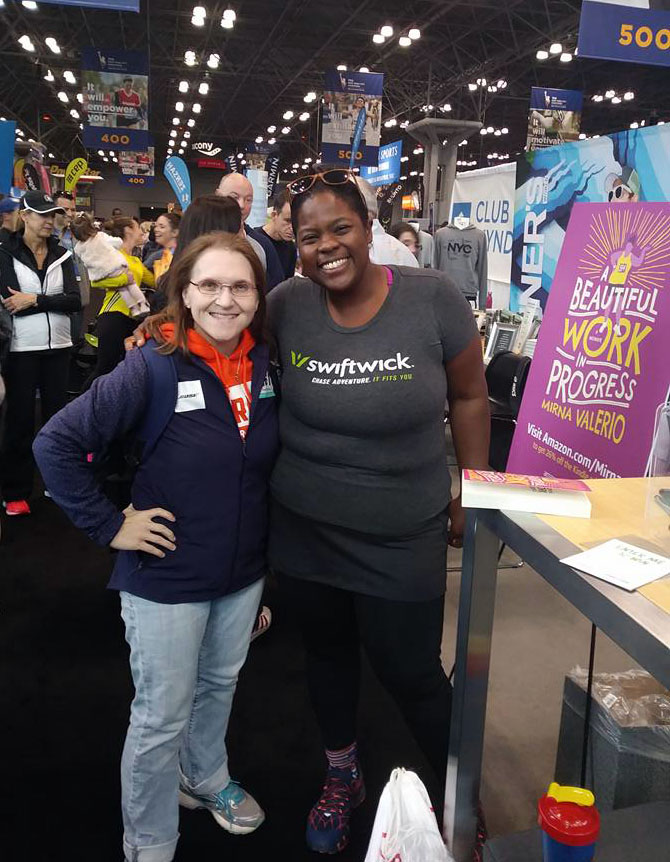 Somehow, I emerged myself from the expo, and back onto the streets of NYC. I then headed toward Penn Station. My mom was on a train coming in from Long Island. I had time to kill before she arrived, so I wandered around Kmart a bit. Once she got in, we both headed for the subway to go to our hotel in Queens. I was finally able to check in.

After changing my clothes and hanging around the room a bit, I again hit the streets to go to our team pre-marathon dinner. The dinner was in Manhattan at Becco restaurant on 46th street. It was a great dinner with my wonderful 261 Fearless team. I enjoyed getting to know some of them better as we laughed and just had a nice evening.

Once I got back to the hotel, I took a quick shower (a pre-race ritual), laid out my flat runner, made my Generation UCAN gels, and headed to bed. Before I knew it, it would be race morning and time to hit the streets of NYC! 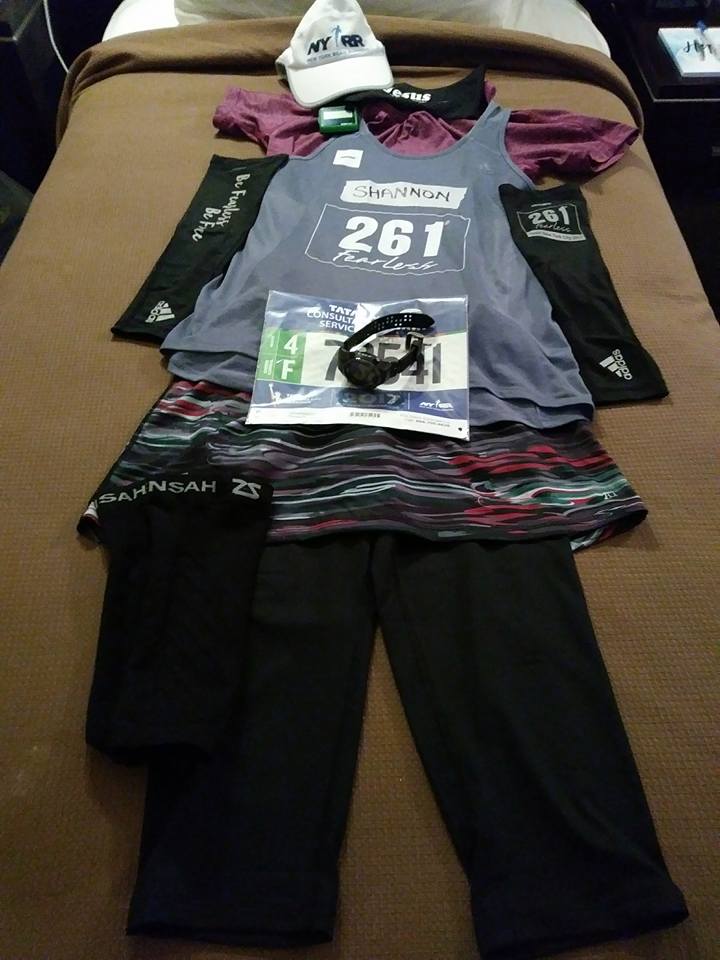