I’m excited to announce that I was selected to be a 261 Fearless Ambassador! 261 Fearless is an organization founded by Kathrine Switzer, the first woman who ran the Boston Marathon in 1967. 261 was the bib number that KV Switzer, the name that she registered for the race under wore when she was attacked by the race director who didn’t want women running the marathon, claiming it was a men’s only event. Kathrine was able to get away from the angry official and finish the race thanks to the aid of her teammates.

The mission of 261 Fearless is to bring active women together through a global supportive community. The community is for women of all levels from walkers to front of the packers. Each woman possesses strength, power and fearlessness because they have gotten out the door and put one foot in front of the other. It’s about having the strength to overcome adversity and doubt within her life all the while giving support to other women who want to take on personal challenges of their own through running. The community is open to everyone, no matter of ability, body-type, religion or ethnicity as it’s all about a common bond through running and walking. Kathrine’s Boston Marathon bib number, 261 unites us all as empowered women runners.

I look forward to being involved with such a great community of my fellow runners! If you would like to join in on the 261 Fearless community, please head over to http://www.261fearless.org to learn more on how you can be involved. 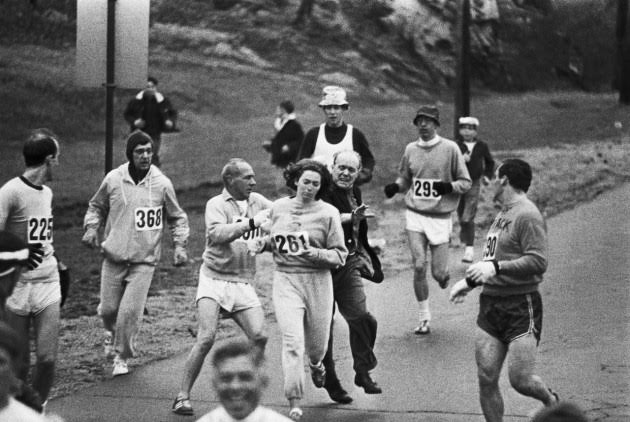 KV Switzer at the 1967 Boston Marathon.