On Saturday morning, I did my 23 mile training run for the marathon. It ended up being the toughest run I’ve had this season. Suppose, it was bound to happen, there usually is one tough run when training for a marathon. 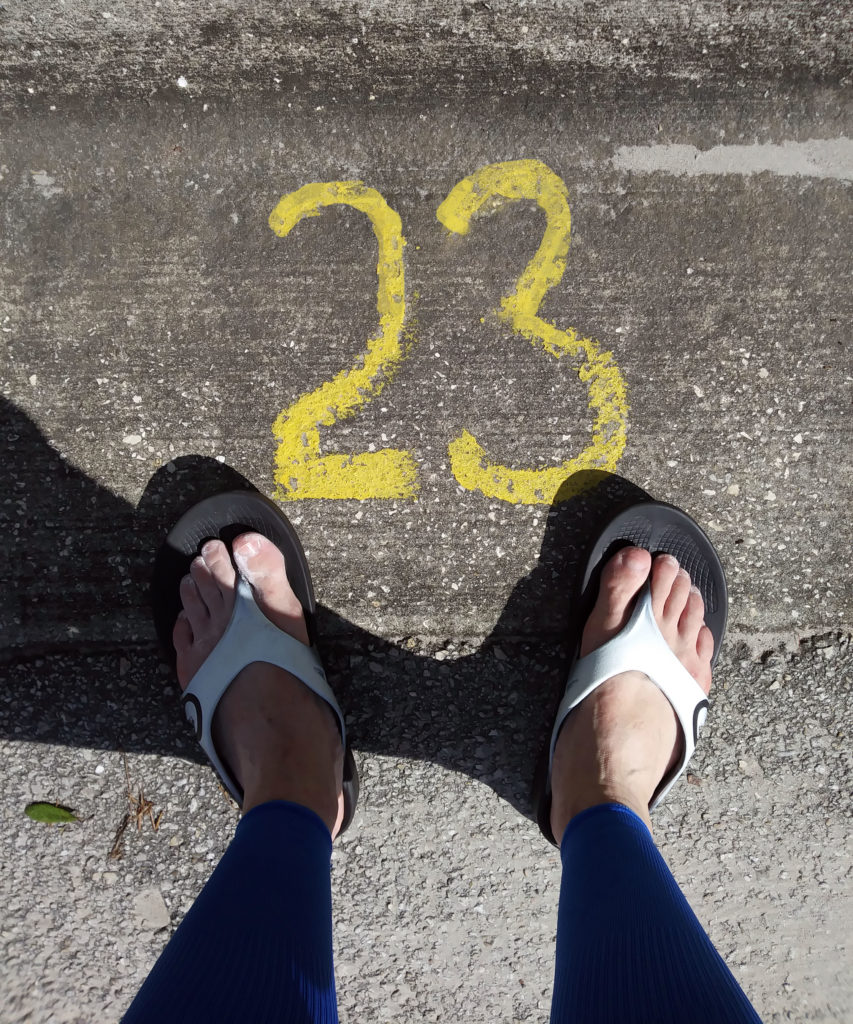 I started at 3am with seven of my group. We did a 9 mile run in Baldwin Park. We saw a lot of shingles on the ground, as well as trees and debris in the neighborhood after the hurricane. I hadn’t run the entire week, so I was glad to be back out there with my group.

We then got back to the school, our starting point and met up with some of the others in the group. This was about 5:30am, and when we headed out toward Winter Park, there were eleven of us at this point. On the way into Winter Park, we encountered more debris and even some downed trees blocking sidewalks. But, as long as we stayed alert and watched where we were going, it wasn’t too bad.

By the time I hit the half marathon point of the run, I was feeling pretty good. I was again using UCAN on this run for fuel, and it was working out well. I’ve definitely decided to use it on marathon day, I’m just not sure if it will be just for the first part of the race or if I can make some gels to extend being able to keep using it on the course.

It was a couple of miles or so later that I realized that okay feeling was fading. I was feeling a blister coming on in a hot spot I’ve been dealing with on my left foot. Not exactly what I wanted to have to deal with for the next eight miles. Thankfully, when we stopped at a nearby Panera for a restroom break, I was able to get a bandaid from the nice girl behind the counter. It was very appreciated. 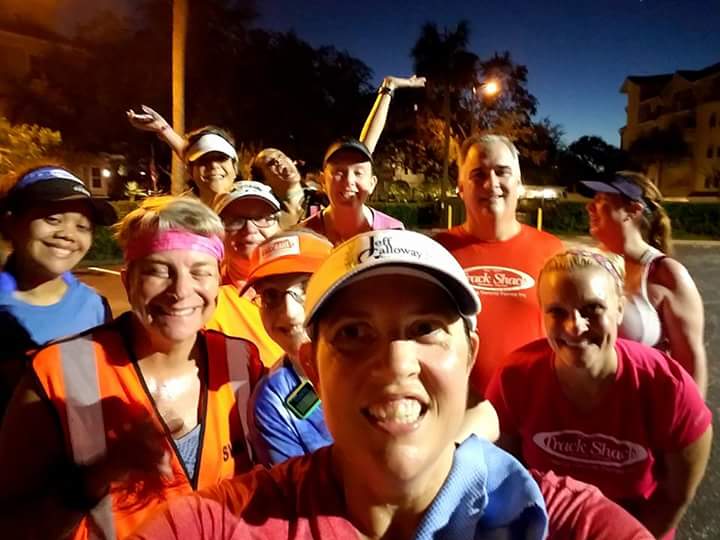 Heading back out after our Panera stop, I noticed I still felt the urge that I had to go to the bathroom. Not to get too women-TMI on everyone, but I decided I might be dealing with a UTI since I had some burning along with the urging to have to stop to pee. Talk about a fun situation. Blister and now that, okay this run was going to be tough.

When it came down to just myself and my running friend, Jenny, we were both feeling tired and ready to be done. We had I believe six miles to go and those miles would be LONG! I felt that getting from mile 17 to 20 was SO long. Those last miles were quite a push.

As the group leader, I gritted my teeth and pulled up my ‘big girl panties’ and got into motivator mode. It was Jenny and myself, and she was ready to stop, I could tell. As much as I was hurting, and my blister making me feel as though my foot was on fire, I did my best to turn it all off. It was going to take all of my mental strength and faith to get us to the end of the run.

What’s interesting when you’ve been out running for such a long time is how conversations can become funny. I found myself commenting about my blister, referring to it as “that hateful thing.” This made Jenny laugh, which caused at least a temporary forgetfulness of her own soreness. I went on about how awful the darn thing was, and we both began making up silly things about running woes like blisters and uncomfortable chafing. Again, after almost 20 miles, it’s amazing how funny something can become. 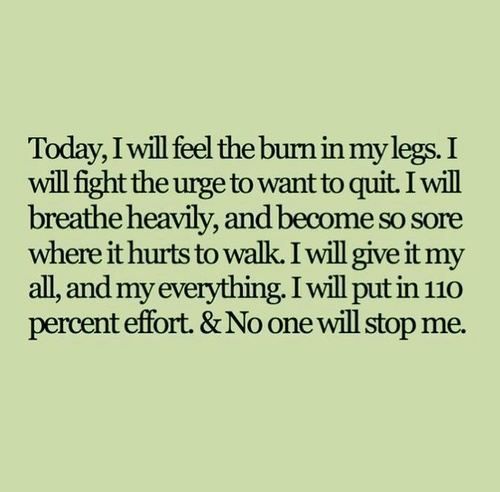 Once that silliness wore off, my stupid left foot (yup, the blister one) became numb. How fun that was to try to run through. To distract us, I pulled out my cellphone and put on some motivating Christian pop/rock music. I mean hey, surely that would pep us up, right? It got me going, and Jenny a bit as well.

When we finally hit mile 20, I couldn’t have been happier. Now, it was only another 3 miles. Unfortunately, the previous 3 miles felt like forever, and I had a feeling the next 3 would be just as long. At least they would feel that way. I told Jenny that once we got into Baldwin (we were on the Cady Way trail at this point, heading into the village center), we should stop at CVS or Publix for a drink. My thought was, maybe a little soda would help. Now, I don’t normally drink soda, but I have found it helps on runs sometimes and after runs when you feel light-headed or nauseated.

I ended up heading inside the CVS in downtown Baldwin, but Jenny was struggling. She didn’t want a soda, so I grabbed her a cold bottle of water and myself a can of diet coke. Quickly checked out and we met back up outside. She was stretching and the water did help her some. I drank about half the can of soda and I found it did help me feel better. I was even able to run/walk the remainder of the run, which was a couple of miles. 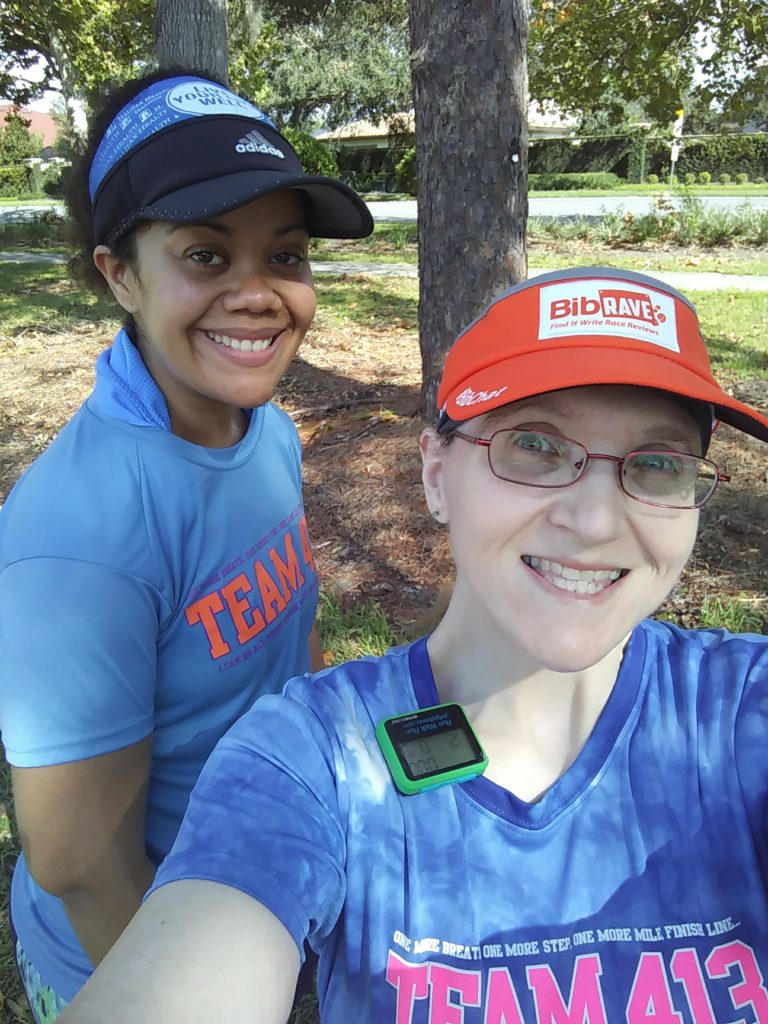 When we got back to the school, my watch was actually a bit behind mileage-wise. Jenny agreed we had done 23 miles for sure, as her watch indicated that. I did stop mine once and lost probably about a half of a mile since I forgot to restart it right away when we got going again. But, I’m so darn stubborn about my watch actually saying 23 miles, so once we got a pic, I proceeded to walk the last bit around the school until my watch hit 23 miles. Some of us are just so crazy about that. LOL!

Once I finished, I got my shoes off and checked out the damage to my blistered foot. Yup, it looked bad. Was the worst blister I’ve had thus far running. It went from the bottom of my foot on the padding under the big and second toe to in-between those toes, in the webbing. No wonder it was so painful and got numb!

I mixed up my Vega Recovery and drank it as I drove to get my post-run smoothie. In case you are wondering, I went with a Chia Banana Boost one with peanut butter from Tropical Smoothie. 🙂 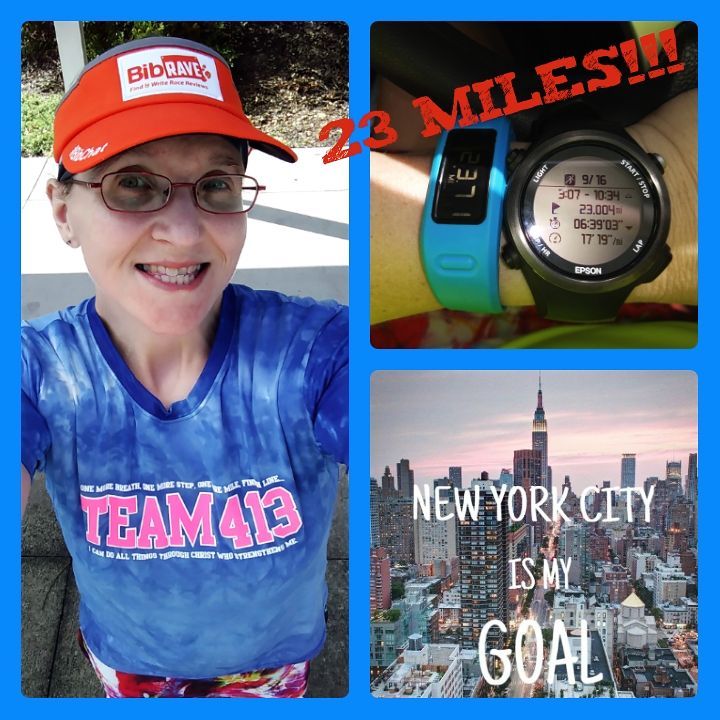 While this was a tough run, I am proud of getting through it. I was pretty sore the rest of Saturday, but when I woke up on Sunday morning, I was barely sore. I attribute that to the Vega Recovery drink as well as BCAAs that I always make sure to take. And, a post-run massage doesn’t hurt either.