Okay, so maybe it wasn’t insanity, but it is kinda crazy to run such long miles. Don’t get me wrong, I love running, but this one was pretty painful. My toughest to date. While I thought the 17-miler I did a few weeks back was hard, it was a cake walk compared to the 20 miles this morning.

The run began at 3:30am this morning, which is way too early, but a time that I’ve had to sort of get used to with my marathon training. The more miles we have to do, the earlier we begin on Saturday morning. Once you get moving, it doesn’t seem that bad, and the plus side is, you are done early! 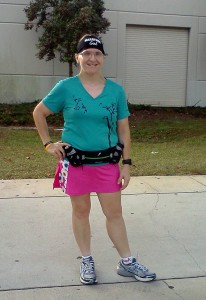 I have a blood blister on a tip of one of my smaller toes on my right foot from running the OUC Half Marathon last weekend, so I was a little concerned about causing further issues with it. The toe was no longer hurting and while it has a ways to go in the healing process, it has improved in the last few days. So, I put on a bit of invisible bandage on it and then put on a blister bandage. After that, I put on Body Glide and my socks and shoes and was ready to go.

When I got to the school to meet up with my group, I felt ready to go. There were about ten of us and some were doing 10 miles, others up to 26. My group is so big that we tend to have quite the variety as to what mileage is needed each weekend with all the races coming up.

The first 4-5 miles went by pretty quickly and I barely realized I had run them. I took a Clif gel about that time during a walk break (we were doing 30 sec run to 60 sec walk intervals). I later had some Clif Blocks by mile 8. By the time we made it back to the school to drop off some runners as we hit mile 10 and pick up other runners, I was feeling a bit tired but still motivated. My toe felt okay and that was a good thing.

Besides being tired on and off doing the run, I didn’t really get into the real roughness until mile 17. It was at that point that all I wanted to do was stop moving, sit down on the ground and stay there. But, I used all my mental will (which was dwindling) to stay upright and moving along. Also, my legs, especially my calves were getting tight. I felt like I was trying to move lead with every step I took. The odd thing was, it was actually kind of worse to walk. I felt less pain and discomfort when I was running. Go figure.

I ran the last two, rough miles with my group leader, Nancy. She was giving me “tough love” throughout the morning and I’m glad she did. Sometimes we need to just be told we are fine and to keep going. I was so so happy and thankful to finish those 20 miles. If I thought doing 17 miles was hard, this 20-miler really tested me beyond anything I had done before. Felt so good to hit that milestone. 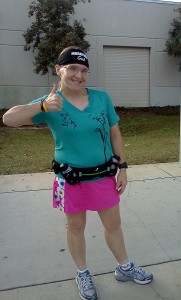 Thumbs up and all smiles after my milestone run.